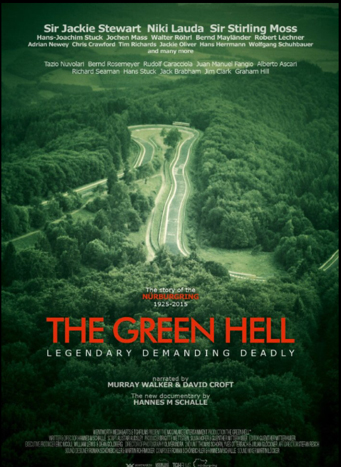 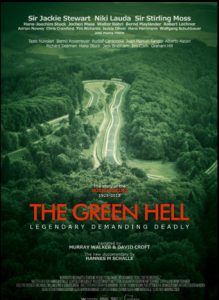 Fast and Furious – look out. And please do not confuse The Green Hell with The Green Mile. Instead get inspired by this thrilling car driven juggernaut from Touchwood Pr that gets it’s own special screening in a limited engagement at Vancouver’s prestigious Park Theatre. Part of the Cineplex Events series this amazing show is well worth the effort to seek out.

Full of history and uncanny vintage footage this documentary on Formula 1 racing is a car enthusiast’s dream. Director Hannes Michael Schalle is an obvious admirer of racing, so how he managed to  cobble together vintage clips and news reel footage of Germany’s famed Norburgring race track is a marvel.  Complete with insightful interviews from those who were there we see the construction of the track and the importance this enterprise played in Germany from the late nineteenth Century through the Hitler years and well into the 1970s.

Part of German pride this economic powerhouse helped usher in Europe’s love affair with the automobile as perennial heavyweights Mercedes Benz and Porsche fought it out for bragging rights at winner’s circle and as a way to improve and expand their manufacturing base and their own car popularity among consumers.  A bit late on the scene but not to be outdone the British were not far behind as the likes of Stirling Moss and Aston Matin were to become household names throughout the 60s and 70s.

Thrilling races at the track are wonderfully captured in this highly enjoyable look at the development of road racing in Germany and beyond and Formula 1’s impact on a public yearning for more.