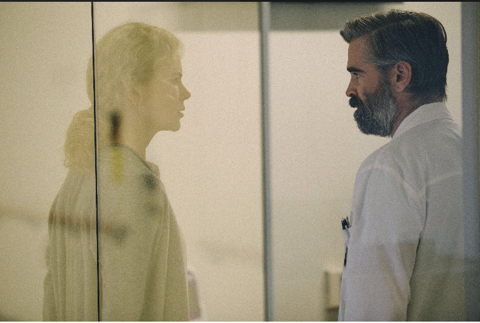 Hot off the smoke emitted from the well-received The Lobster European director Yorgos Lanthimus continues to dazzle and impress with The Killing of a Sacred Lamb.  Suffice to say that the chill is back this fall thanks to this eye-opener if not stomach-turner by way of Elevation Pictures. Seek out this suspense thriller at local Cineplex Theatres such as The International Village Cinemas most likely.

Film making is truly an international affair. Consider this film to be an excellent example of this fact as both Collin Farrell (Phone Booth) and Nicole Kidman (Far and Away) simply excel as a rather upscale couple. Happily married with two children Steven and Anna Murphy seem to have got it made. As a doctor Steven is a well-respected while Anna is the perfect mother. To outsiders all seems well.

All families run into problems now and then. Being a doctor calls for compassion so nothing seems out of the ordinary when the middle-aged physician befriends mysterious Martin for noble if not altruistic reasons. Actions speak louder than words and Young actor Barry Keoghan turns in an outstanding intensely insane portrayal of a mixed-up youth that Heath Ledger’s The Joker would be proud of. Looks can be deceiving and after a period of time this new-found friendship manages to “intrude” on the Murphy household.

There are no fix as bad things begin to pile up leaving a very haunting situation. Original, exciting and outstanding performances leave an unsettling feeling in your tummy as what should have been a routine situation gets out of control. Together on-screen Kidman and Farrell sizzle and are fully believable and left in the twilight zone as a strange things occur. Hoping to keep it together is Kidman whose rationality is put to the test as an unstoppable evil is determined to turn an ideal world on its head.

Huge moral issues come to the fore as The Killing of a Sacred Deer is exciting, dynamically written and as scary as things get with uncompromising comprehensive performances throughout.