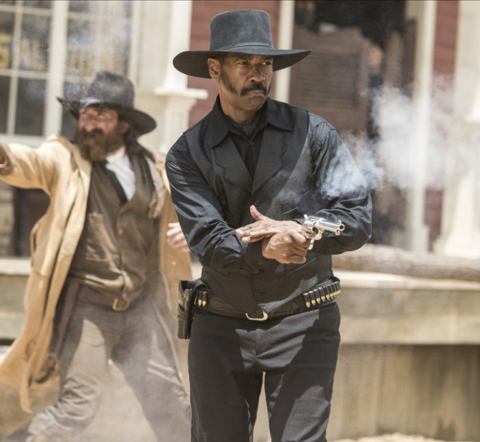 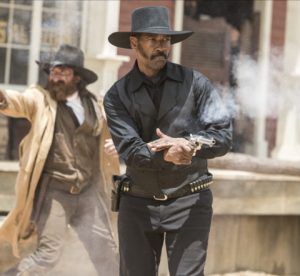 Good story telling is timeless. Just like how MGM studio smartly rebooted Rocky a few years back now we are treated to a reimagining of the 1960s Classic The Magnificent Seven. Yes this new version, now spellbinding audiences at Cineplex Odeon Theatres across the B.C. Landscape is a whole lot of fun. Why the success of this blockbuster may well ignite a surge in westerns.

Inspired by the original Japanese samurai classic The Magnificent Seven is all about doing the right thing. Without question the filmmakers got the right director who assembled the right cast. Pure class is wielded by the tactful eye of director and co-writer Antone Fuqua. It’s lucky for us he brought along two heavyweights from his earlier rousing corrupt cop caper. Denzel Washington and Ethan Hawke. Both men flee the confines of the big modern inner city for the much smaller rural life a few centuries earlier.

Bad news travels fast. Way out west a small town if facing big problems as a national land baron roughshod over them. No one is safe from the tentacles of Bartholomew Bogue who delights in tormenting the weak in pursuit of his pocket of gold. You want bad guys, well you’ve got them in spades as Peter Skarsgard wields an army of desperadoes who delight in tormenting the weak.

With no hope in Sight a gutsy homesteader reaches out. Against all odds a lawman for hire takes a liking for the Use and before you know it the battle is joined. Set to turn the tables and save the community is a cool cat called Chisolm. Cool as a cucumber is Denzel Washington. Not even a Superman could stop the terror confronting the meek populace, to better the odds Sam Chisolm calls in a few favours to start, assembling a rag tag team of desperadoes who come together to take the law into their own hands and in the process try to free a community from the clutches of evil.

Converts to this noble cause are a cocky Chris Pratt and God-spewing Vincent D’Nofrio. Effective tension and perfectly paced build-ups simply ramp up the excitement for a good movie and The Magnificent Seven has it all. Great chemistry between the well-defined characters, gritty action, witty dialogue, lots of six shooters and rifles firing on all cylinders, gorgeous cinematography and a classic confrontation of good versus evil makes The Magnificent Seven a magnificent movie to see.