Asian Journal
Home Movies & Music The Phantom of the Open 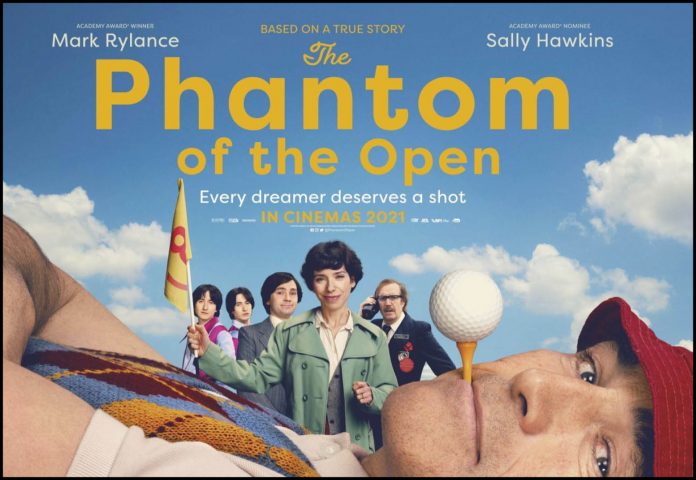 You don’t make it to the big leagues without hard work and a little luck. Try telling that to just an average bloke trying to weasel his way into a prestigious sporting event in the upliftng The Phantom of The Open. Not to be confused with the world famous musical related to opera this sports themed movie is actually a bit of a soap opera – cue the music – with just hilarious overtones. Consider this to be ultimate tale of the underdog and just a wonderful summertime diversion. Thanks to Sony Pictures classics and Mongrel Media you can now see this enchanting movie at the Fifth Avenue Cinemas as well as at select Cineplex Cinemas and Landmark Theatres around B.C.
Set in the 1970s and beyond the most amazing thing about this film is that it is actually based on real events. At the end of the day dreaming is what this story is all about. Locked in a loveless job as a crane operator at a British shipyard Maurice Flitcroft just seems to be biding his time. Mark Rylance is just brilliant in an affable performance as this nonchalant man whose devil may may care attitude is contagious.
Remember this was the era of restraint and downsizing so one could say Maurice’s days on the job are numbered and you may not be that far off the mark. Married to the shy and reserved June the pair do their best with what they have to raise three young boys and make ends meet but it ain’t easy. Sally Hawkins perfectly plays the demure wife whose drab appearance but heart of gold blends with the dark times of the Thatcher period.
Still life must go on. One day Maurice has a vision ( I.e, dream) that he can be a golfer. I Kid you not, Never mind that this man, who now in middle age and may be over the hill has never swung a club in his life let alone made i.e. tried ) a putt . Oh, and if this isn’t bad/crazy enough the man wants to play in The British Open. Let the games begin.
What a wild ride The Phantom of the Open is. James Bond has nothing on this guy. It is hilarious how this fish out of water “rookie” tries to weave his way through the aristocratic ways of the country club set on route to the nations biggest tournament. Think Rodney Dangerfield in Caddyshack and you get the picture.
Besides the zaniness of the entire situation you come away with a sense of warmth as this film has an underlying message and a heart of gold. It’s all about the underdog and going up against the establishments and the road blocks thrown in the way of ordinary people. The end results are a life lesson and set forth in a memorable/whimsical way.