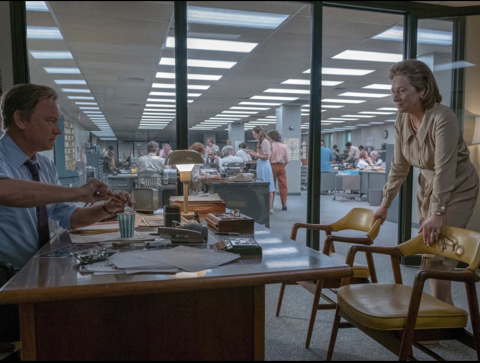 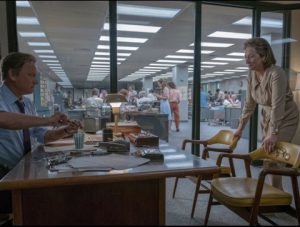 Never trust a politician. Most are born liars and only in it for themselves. Need proof? Just look at the antics south of the border with the trumped-up Trump administration or closer to home the partying ways of not out for Justin Trudeau recently called on the carpet by the federal ethics commissioner over a so-called “family holiday” with a multi-billionaire with a private island in the Bahamas who he hadn’t seen in 30, count ’em 30 years. Thank God that the press was on their toes to uncover the way the ultra rich elites try to rip off the public. Even more shocking is how the highest echelons of the American government tried to hoodwink (and that’s being exceedingly charitable) a wildly unpopular war that reached its boiling point in the 60s. Get the inside truth and it’s hard to believe the actual truth by way of The Press. Relevant and startling in all manners this tense dramatic thriller from 20th Century Fox and Dreamworks Studios is currently spellbinding audiences at certain Cineplex Theatres around B.C.

Master director Steven Spielberg (JAWS) is in his zone win this ultra exciting story. Known by many already The Press focuses on the topsy turvy relationship between the owner/Publisher of The Washington Post and its demonstrative editor. With a backdrop of The Vietnam War these two fiercely loyal patriots somehow become involved in the story to end all stories – the truth behind a foreign incursion and the lengths various presidencies would go to deceive the American people.

You want first in a movie – you got it. For the first time ever, Oscar winning Meryl Streep and Tom Hanks again chew up the scenery as press insiders who latch onto a potential scoop to perhaps end all scoops and the odd politician or two willing and able (and capable) to shut them down – or worse.

Tense as can be The Press takes us bend the scenes charting the roller coast ride of the media trying to get at and make sense of the notorious Pentagon Papers. Emotions run high in this race for the truth which should easily be a frontrunner at this year’s Oscars. Easily one of the best films in many a year The Press’s riveting and relevant entertainment from start to finish. Extra, extra read all about it – or better yet see history in the making at your nearest Cineplex outlet.