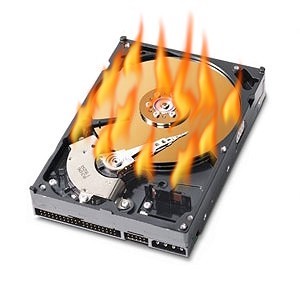 Did you know that, while natural disasters tend to take center stage when considering the causes of downtime, hardware and software failures and human error are statistically more common?

In fact, hardware failures alone comprise more than one-half of disasters for small to mid-sized businesses, and the sweeping majority (80.9 percent) of failures are caused by hard drive malfunction. Let’s face it, hard drives fail, and they fail often, with 22% of them failing in their first four years of usage. Storage-area network (SAN) failures, unexpected disc failures coupled with a raid system collapse, are among the hardware-failure disasters many businesses experience and when the SAN dies, a company’s entire environment dies with it.

A hard disk drive failure occurs when a hard disk drive malfunctions and the stored information cannot be accessed with a properly configured computer. A disk failure may occur in the course of normal operation, or due to an external factor such as exposure to fire or water or high magnetic fields, or suffering a sharp impact or environmental contamination, which can lead to a head crash. Some hard drives simply fail because of worn out parts, others fail prematurely

Hard-drive failure can be catastrophic or gradual. A catastrophic failure typically is a drive that can no longer be detected by CMOS setup, or that fails to pass BIOS POST, so that the operating system never sees it. Gradual hard-drive failure can be harder to diagnose, because its symptoms, such as corrupted data and slowing down of the computer system (caused by gradually failing areas of the hard drive requiring repeated read attempts before successful access), can be caused by many other computer issues, such as malware.

A rising number of bad sectors can be a sign of a failing hard drive, but they may not become evident to utilities such as Scandisk unless the utility can catch them before the hard drive’s defect management system does, or the backup sectors held in reserve by the internal hard-drive defect management system run out. A cyclical repetitive pattern of seek activity such as rapid or slower seek-to-end noises (click of death) can be indicative of hard drive problems.

We’ve seen it all! And sometimes it is not pretty. A willingness to recognize that hardware is not immune to failure is an important 1st step. These 3 simple rules will keep data loss to a minimum;

–         Use an automated offsite (online) backup service. For about $5 a month, you can easily protect your critical data.

If you’re not sure about how well protected your company data is, call us today and discover what you need to do!

Bob Milliken is the TheITguy@CascadiaSystemsGroup.com specializing in helping businesses with their IT needs. Discover how great local IT services can be.  604.270.1730