Asian Journal
Home India News Those who did nothing spread lies on reservations: Modi 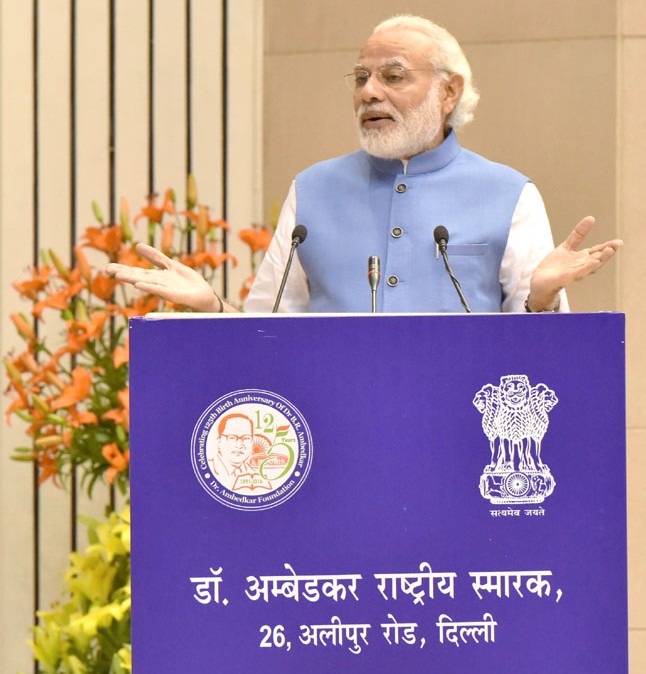 New Delhi, March 21 (IANS) Prime Minister Narendra Modi on Monday said those who did nothing for the country since Independence spread lies on the issue of reservation whenever the BJP came to power at the Centre or various states.

The Congress hit back, asking Modi as to who raked up the reservation issue in the first place and put the blame at the RSS’ doorstep.

Speaking at the foundation-laying ceremony of B.R. Ambedkar National Memorial here, Modi said, “Those who did not do anything for 60 years often spread lies. When (Atal Bihari) Vajpayeeji became the prime minister, they started saying that reservation will go. He was the prime minister for two terms. Nothing of that sort happened, but lies were still spread.”

In Madhya Pradesh and Gujarat, where the BJP has been in power for many years, “nothing has ever happened to end reservation for Dalits and tribals”, but lies were still spread to mislead the people, he said.

Modi said such “misinformation campaigns” were carried out by people who only wanted to do politics on reservation.

“There are misgivings against us. But the truth is, we in the Bharatiya Janata Party have always had the utmost respect for Ambedkar,” the prime minister said.

“So, the prime minister would be well advised if he directs these queries with regard to revisiting reservation to its or to their ideological mentor,” Tewari said.

Meanwhile, former Bihar chief minister Jitan Ram Manjhi, who belongs to the Mahadalit caste in Bihar, advocated a review of the reservation policy that sets aside quota for the weaker sections of society in government jobs and educational institutions.

“I strongly feel that the reservation policy must be reviewed because otherwise those who actually require reservation are not benefitting,” Manjhi said in Patna on Monday.

“If Martin Luther King Jr is seen as an image of fight against injustice, Ambedkar should also not be seen as second to anyone,” he said, adding that the Dalit leader was a ‘vishwa manav’ (world leader).

“Babasaheb was the voice of the marginalised,” the prime minister said, adding that the founding father of the Indian constitution should not be seen as a leader of any particular caste.

“Rather he was a protector of all human values. We should not limit him to our borders.”

“To call Ambedkar the messiah only of the Dalits is a great injustice to him. He raised his voice against all injustice,” Modi said.

The BJP and the Modi government have come under attack following the death of Dalit student Rohith Vemula in the Hyderabad University and alleged pressure from the Rashtriya Swayamsevak Sangh to dilute the reservation policy.

At the end of the two-day national executive meet on Sunday, the BJP central leadership charted out a detailed roadmap to reach out to the Dalits.

The thrust of Ambedkar’s teachings for the people to get educated because education followed by organising the people can lead a community on the road to success and prosperity, said Modi.

“The struggle, as emphasised by Ambedkar’s teachings, can only come after these,” he said.

The prime minister said that his government was trying to realise Ambedkar’s dreams by providing electricity to 18,000 villages in a fixed time frame.

“These all are his ideas; only some people in between sabotaged these works,” he said in a veiled criticism of the Congress. He lamented that even after 60 years some villages in India remained in darkness.

“In order to realise one of his dreams, I will launch a technology on April 14 (birth anniversary of Ambedkar) that will help enable farmers get updated information about market rates of farm products,” the prime minister announced.