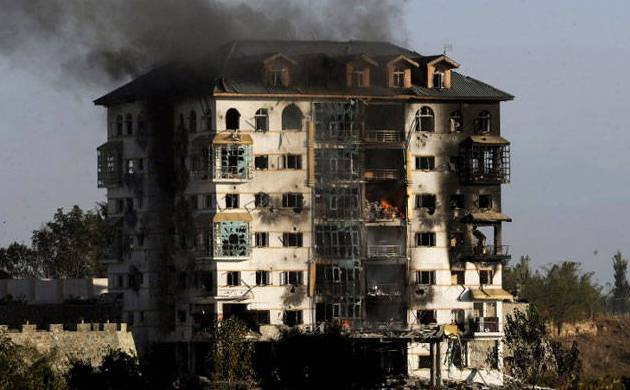 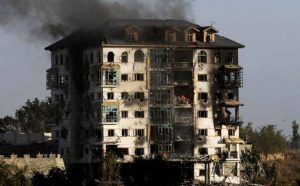 Srinagar: A three-day-long gun battle between terrorists and security forces ended on Wednesday with the army killing two militants holed up in a multi-storey government building on the outskirts of Srinagar, authorities said.

The gunfight, one of the longest in the recent history of Kashmir’s separatist war, left three security personnel injured on Monday when militants sneaked into the empty hostel building of Jammu and Kashmir Entrepreneurship Development Institute (JKEDI) in saffron town of Pampore, some 12 km from here.

The resulting 60-hour standoff, which saw a heavy exchange of fire between militants and security forces, left the seven-floor hostel complex completely destroyed. The building with a capacity for 200 inmates was opened with state of the art facilities less than two years ago, JKEDI officials said.

Briefing the media, army and police officers said two suicide attackers, who had entered the complex on the banks of Jhelum River, were killed. One of them was killed on Tuesday evening and the second on Wednesday.

“We had to proceed very cautiously since the building where the militants were holed up had 60 rooms. Two terrorists have been eliminated without any casualty to the security forces and two weapons recovered,” Narula said.

For three days, the security forces kept on aiming rockets, grenades and automatic gunfire at the building that had an exterior glass facade.

While parts of the building caught fire, the militants kept on changing positions inside the building and using their ammunition sparingly.

The entire JKEDI complex was illuminated with floodlights during the two nights of operation to ensure the guerrillas did not escape.

The seven-storey Jammu and Kashmir Entrepreneurship Development Institute (JKEDI) hostel that was constructed with the help of central government funds for entrepreneurship development in the job-starved state is located on the banks of the river Jhelum.

The hostel building was vacant when the two militants sneaked into it on Monday from the river side. The institute had shifted much of its operations to Jammu in the wake of the current unrest in the Kashmir Valley.

JKEDI officials told IANS that a couple of cooks were sleeping inside the building but they came out as soon as it became evident that the militants had occupied its top floor.

A caretaker, who stays in the complex 24 hours, said he saw smoke coming out of the top floor and called the fire brigade and police on Monday morning.

“We don’t know exactly what happened and how the militants sneaked in and occupied the building. But fortunately there were no employees and no inmates,” he said.

The main building of the institute was attacked in February when three Lashkar-e-Taiba militants killed six persons – a civilian, three soldiers, and two paramilitary troopers. The militants were gunned down in the February battle that also raged for nearly three days.

The road on which the institute is located is the lifeline not only for local supplies but is the only all-weather link used by the army to reach the Srinagar-based 15 Corps headquarters that is the nerve centre of the fight against militancy in the state.

The area around the building houses a government-owned joinery factory and a highly secured complex of medium and shortwave radio transmitters of Radio Kashmir, Srinagar.

Ironically, the government-funded autonomously-run institute had refused an earlier request for a police or paramilitary security cover fearing that it may deter young Kashmiri men and women from visiting the institute. The complex was guarded by unarmed private security guards.