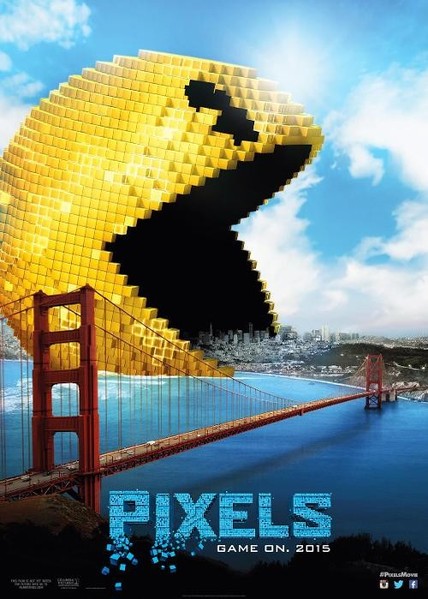 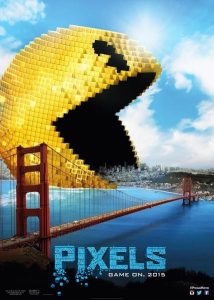 Love of games and not so good sportsmanship takes centre stage in Pixels. Family friendly Director Chris Columbus (The Goonies) delves into his youth with this smart nostalgia treat from Sony Pictures now showing at countless Cineplex Odeon arenas around B.C.
Say what you will, like him or not, Adam Sandler (The Wedding Singer) is back on his game as the driving force behind this highly imaginative movie. Story wise this tale follows the convoluted minds of four nerds who as kids were the talk of the gaming world. Back then we are talking arcades and the games in question were first generation trendsetters, like Pac-Man, Asteroids and the like.
Competition in the youth wing was intense with top participant forging an unholy rivalry. Clean cut Sam Bremmer never could outwit Eddie Plant on the dance floor – check that – keyboard arena. All the actors who play the younger guys bear an uncanny resemblance to the middle aged Sandler, Peter Dinklage, Josh Gad and Kevin James who are pressed into action when an Alien force somehow uses these iconic games to wreak havoc on Planet Earth.
All bets are off when the nerds tangle with the Pentagon and take on hostile creatures from outer space. Crazy dialogue, insane stunts and the eye candy of Michelle Monaghan as an intelligence officer just not into nerds add to the comic appeal of this delightful save the world with buffoon’s crowd-pleaser.
Quite ingenious special effects and a whirlwind atmosphere that is so preposterous it’s actually fun make Pixels a real blast to watch. Smart cameos when you least expect them and delightful vintage film clips of classic cultural icons blend in To make Pixels a delightful summertime comedy fit for all ages at any time of the year.
Pixels (G) ****