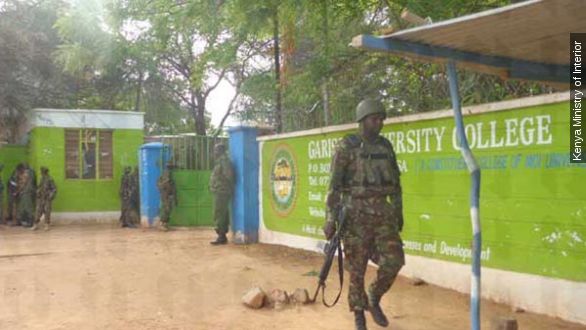 Nairobi, April 3 (IANS) The toll in the terrorist attack on Kenya’s Garissa University College on Thursday has risen to 147, according to media reports.
The Daily Nation reported that bodies of the guards of the university were strewn near the university’s main gate.
A police official said that there was a shootout between the attackers and police officers who were guarding the students’ hostels.
“The attackers shot indiscriminately while inside the university compound.
“However, the attackers retreated and gained entry into the hostels… (A) joint force composed of National Police Service Commission (NPS) officers and other security agencies arrived and are engaged in an elaborative process of flushing out the gunmen from the hostels,” he said in a statement posted on his Twitter account.
Kenya Defence Force (KDF) and police have entered the university’s compound.
Following the attack, the Somalia-based Al-Shabaab militant group claimed responsibility.
Terrified students rescued from the college were gathered at a KDF camp near the Garissa airstrip.
Students who were seriously injured were flown to Nairobi for treatment.
In a tweet, Kenya’s interior ministry said one of the attackers had been arrested as he tried to flee from the scene.