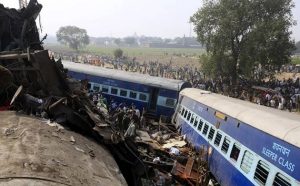 Kanpur/New Delhi: The death toll in Sunday’s train derailment tragedy rose to 146 on Monday as 25 more bodies were pulled out of the mangled coaches, officials said.

“The death toll of the Indore-Patna Express has gone up to 146,” North Central Railways spokesperson Vijay Kumar told IANS.

“While 25 more bodies were taken out the mangled coaches, another person died at Regency hospital in Kanpur,” Kumar added.

The Railways official said that of the 179 injured many were discharged after first aid, while those seriously injured were still admitted in hospital.

The tragedy occurred when 14 coaches of the train went off the rails near Pukhrayan station, about 60 km from Kanpur city.

Rescue operations conducted by the National Disaster Response Force (NDRF) as well as the local police and the Army was called off by the Railways.

He also said that the rail tracks were also cleared. “The damaged coaches have been removed from the railway tracks,” Saxena added.

Earlier in the day, Railways Minister Suresh Prabhu said in the Lok Sabha that Railways has ordered a forensic probe to find the exact reasons of the rail accident.

“There shall be separate comprehensive investigation aided by latest technical and forensic analysis by an appropriate agency to look into all possible angles,” Prabhu said.

On Sunday, Prabhu ordered a high-level probe. He also said that the Railway Ministry has collaborated with the Uttar Pradesh government to provide all necessary help.

Prabhu and Minister of State for Railways Manoj Sinha on Sunday visited the hospitals where the injured were being treated, as well as the accident site.

While the cause of the derailment is yet to be ascertained, Sinha had earlier said the accident could have been caused due to “fracture” of the tracks.

This was the worst train accident in the country after the May 2010 disaster in West Bengal involving Gyaneshwari Express in which some 170 people were killed.