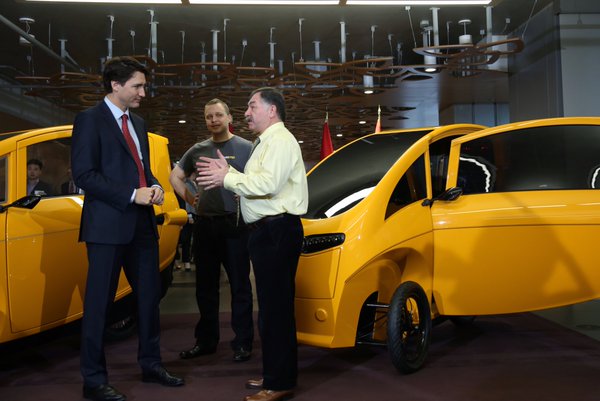 By Geordon Omand and Bruce Cheadle

Smart Prosperity officially launched in Vancouver with encouragement from Trudeau, whose Liberal government’s climate agenda appears to dovetail with the economic transformation envisioned by the new market-oriented group.

“This is really exemplifying for me the kind of co-operation and collaboration that’s going to be so essential in terms of addressing not just the challenges that we’re facing in the coming years, but the tremendous opportunities that are there for us,” Trudeau said at the launch.

Twenty-six individuals have signed on to the initiative, including an eclectic mix of top representatives from banks and insurance companies, aluminium smelters, the United Steel Workers union, a grocery chain, investment firms and the World Wildlife Federation.

They’re looking to identify and promote policies that spur innovation, generate jobs and boost the economy while improving the environment and conserving Canada’s natural heritage.

“I’m a big believer in government not playing the leadership role,” Annette Verschuren, one of three Smart Prosperity co-chairs and the former president of Home Depot Canada, said in an interview before Tuesday’s announcement.

“But government is critical to developing the right policy, the right triggers, the right environment. What’s really more important is that private capital gets attracted to this industry, spurred on by policies that make sense for our country.”

“The number one action point is to accelerate clean innovation, to create the conditions for celebrating clean innovation across all sectors of our economy,” said co-chair Lorraine Mitchelmore, the Calgary-based former president of Shell Canada. “This is truly about market economy, not market distortion.”

Energy efficiency and resource efficiency is another top priority. So if you’re not keen on carbon pricing, the dreaded “job-killing tax on everything,” in the parlance of politics, this market-oriented group won’t be for you.

As Mitchelmore says, there’s already an incentive for industry to become more efficient. “Let’s incent it even more: You need a price signal to actually give that incentive.”

And this is not a group that is disinterested in the overall health of the Canadian economy.

“You don’t see this kind of powerful, diverse group of Canadian leaders come together around issues very often,” said co-chair Stewart Elgie, an environmental law professor at the University of Ottawa and a founding member.

“In many ways this is sort of a once-in-a-generation opportunity.”

Elgie, Mitchelmore and Verschuren have been developing Smart Prosperity for two years and Tuesday’s launch was seen as the start of a much wider conversation with all Canadians about where the country wants to be in 10 years. That future needs to start with government policy-making now, building on what Mitchelmore calls “pockets of success all over the place.”

There’s actually much agreement among business, labour, environmental groups and global organizations such as the World Bank about how the economy and environment can and should be linked for the good of both. But the various sectoral “silos” haven’t been talking to each other, or pushing governments with one voice, says Smart Prosperity.

Elgie likens the global energy and environmental transformation that’s just emerging to Canada’s free trade transformation of the 1980s, which tossed off a century of trade protectionism.

“We’re at that same kind of moment now, there’s a fundamental structural shift happening in the global economy,” said Elgie, who questions whether political leaders will be far-sighted enough to recognize it.

“That is the nature of the moment and it’s why this group of people have come together. This is the issue of our time.”