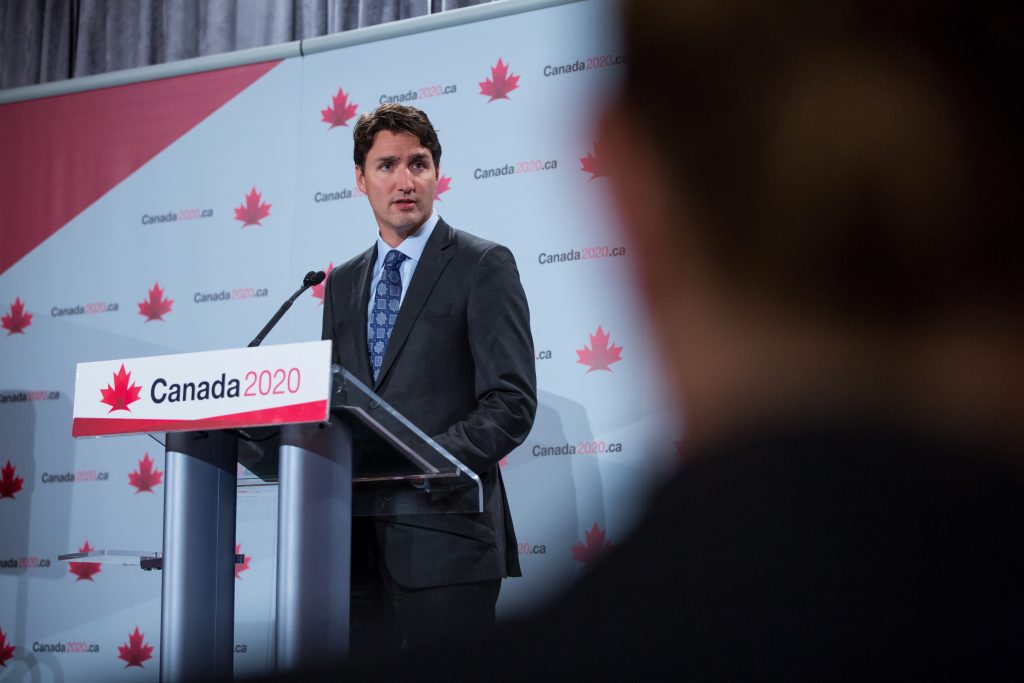 TORONTO: With a host of policies that differ dramatically from his predecessor, Justin Trudeau’s victory over the most conservative leader in Canada’s history will reverberate beyond the country’s borders.

The first major shift came Tuesday when Trudeau announced he had spoken with President Barack Obama and told him he will remove Canada’s six fighter jets from the U.S.-led bombing campaign against the Islamic State group in Iraq and Syria.

Among the other areas in which Trudeau differs from Conservative Stephen Harper: climate change, immigration and whether relations with the U.S. should hinge on the future of the Keystone XL oil pipeline.

Speaking at a rally in Ottawa, the 43-year-old Trudeau _ son of one of the country’s most dynamic politicians _ underlined the sea change.

“I want to say this to this country’s friends around the world: Many of you have worried that Canada has lost its compassionate and constructive voice in the world over the past 10 years. Well, I have a simple message for you on behalf of 35 million Canadians. We’re back,” he declared.

With Trudeau’s decisive victory on Monday, Canadian voters reclaimed their country’s liberal identity, giving the new prime minister a commanding majority in parliament that will allow him to govern without relying on other parties.

That means change in Canadian policies on a broad spectrum of issues.

“Trudeau will return Canada to its traditional approach in foreign affairs which is characteristic of every single government but Harper’s,” said Robert Bothwell, a professor at the University of Toronto. “Canada will go back to multilateralism, back to strong support for the United Nations.”

There will be a “new way for Canada to be on the world stage,” agreed Liberal lawmaker Marc Garneau, who won re-election Monday.

The son of the late Prime Minister Pierre Trudeau, who swept to office in 1968 on a wave of support dubbed “Trudeaumania” and governed for most of the next two decades, the younger Trudeau channels the star power _ if not quite the political heft _ of his father.

Tall and trim, he is a former school teacher and member of Parliament since 2008. He becomes the second-youngest prime minister in Canadian history and has been likened to Obama.

The White House said Obama called to congratulate Trudeau on Tuesday afternoon and said in a statement the two leaders “committed to strengthening the countries’ joint efforts to promote trade, combat terrorism and mitigate climate change.”

Trudeau said he discussed his commitment to withdraw Canadian fighter jets from the U.S.-led aerial bombing mission against Islamic State group radicals in Syria and Iraq. Trudeau believes Canada’s military involvement should be restricted to training missions only.

“He understands the commitments I’ve made around ending the combat missions,” Trudeau said.

Trudeau’s victory will likely improve ties with the United States, at least for the remainder of Obama’s presidency. Harper was frustrated by Obama’s reluctance to approve the Keystone XL pipeline from Alberta to Texas and clashed with the president on other issues, including the Iran nuclear deal.

Although Trudeau supports the Keystone pipeline, he argues relations should not hinge on the project.

“Theoretically, Justin is for Keystone, but he can obviously jettison that,” Bothwell said of the project, which Democratic presidential hopeful Hillary Clinton recently expressed opposition to. Republican contenders are for the project.

Still, there are differences that could lead to friction with the U.S., including the decision to remove the jets from the campaign against the Islamic State group. Harper had said such a move would hurt relations with the U.S.

Trudeau said Tuesday that the U.S. president understood his commitment to end Canada’s involvement in the combat mission.

Trudeau has also vowed to take in 25,000 Syrian refugees by the end of the year. Harper declined to resettle more Syrian refugees despite the haunting image of a drowned 3-year-old’s body washed up on a Turkish beach after his family’s failed attempt to immigrate to Canada, and some analysts have questioned whether Trudeau’s goal is realistic.

Trudeau will have a more balanced approach to the conflict in the Middle East, analysts said.

“It certainly won’t be the kind of blanket support for the Netanyahu regime that we saw from the Conservatives,” Maioni said.

Trudeau has also vowed to consult the premiers of Canada’s provinces in an effort to come up with a plan ahead of the Paris climate talks in November. Under Harper, Canada pulled out of the Kyoto Protocol, the emissions reduction program for rich countries, and the Conservative leader was perceived by environmentalists as more interested in protecting Canada’s oil-rich region of Alberta _ which has the third-largest oil reserves in the world _ than efforts to stem the effects of climate change.

“Canada’s days of being a less-than-enthusiastic actor on the climate-change file are behind us,” Trudeau told the news conference in Ottawa.

Nelson Wiseman, a political science professor at the University of Toronto, said Canadian diplomats are delighted at Trudeau’s election because Harper never let them speak without checking with the government first. “They’ve been totally marginalized. They’ve been told ‘We don’t care what you think,”’ Wiseman said.

Harper, whose nearly 10 years as prime minister makes him one of the longest-serving Western leaders, will step down as Conservative leader after the crushing defeat, his party said.

During the campaign, Trudeau re-energized the Liberal Party, which suffered its worst electoral defeat four years ago, winning just 34 seats and finishing third behind the traditionally weaker New Democrat Party.