Delta: At 10 o’clock Wednesday morning, October 5, Tsawwassen Mills, classified as a Super Regional Shopping Centre, will open its doors to the public after two and a half years of construction. Located on the Tsawwassen First Nations land (with whom Ivanhoe Cambridge is partnered) the mall is beside Highway 17 at 52nd Street, not far from the BC Ferries Terminal. The 1.2 million square foot mall, and Guildford Town Centre in Surrey, are the two largest malls in the south Fraser and third largest in the province.

At this point, 13 anchor tenants have been announced, including; Bass Pro Shops (first in BC), DSW Designer Shoe Warehouse, Pro Hockey Life (first in BC), Saks Fifth Avenue Saks OFF 5TH (first for BC), Tommy Hilfiger Outlet and eight others. The total number of tenants announced so far number 160. 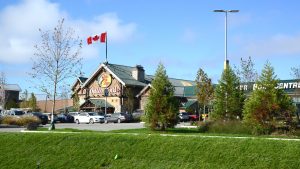 Advance Opening
Although the mall opening is October 5, the Bass Pro Shop has announced they will open their doors at 6 pm the evening before.

The Bass Pro Shop store, the first to open in BC will occupy 145 thousand square feet and although it refers to itself as a retailer of hunting, fishing, camping and related outdoor recreation merchandise, the description understates the reality. The building is designed as a giant log cabin, which is reflected inside the store and is all creating a feeling of being in the outdoors. One of their signature attractions is an indoor water feature that showcases local fish species. Earlier in the week Chinook salmon were released into the enormous aquarium by Tsawwassen First Nations Chief Bryce Williams, during a special ceremony. Reports are that other fish, possibly including sturgeon will be added later.

Tsawwassen Mills is a sister mall to CrossIron Mills north of Calgary, and Vaughn Mills, 40 km north of Toronto. The design follows the Mills Corporation’s premium brand outlet retail format that evolved in the United States, and was brought to Canada in the Vaughan Mills development in 2004. The concept combines large format anchor stores and premium brand outlets alongside major entertainment components, and is referred to as the racetrack layout.

The Mills operations have been constructed outside of big centres, however this appears to have been of little consequence in attracting visitors. If the openings of the sister malls are anything to judge by, Highway 17 in Tsawwassen can expect considerable congestion, as evidenced by highway signs already warning of heavy traffic, when the mall opens on October 5. Within the first five days of the CrossIron Grand Opening approximately 250 thousand people had visited. At Vaughn Mills, it was reported that the mall had its 2 millionth visitor less than two months after its opening.

And there’s even more!
If the Super Regional Shopping Centre doesn’t provide enough shopping opportunity, there’s more. Tsawwassen Commons, a 550 thousand square foot outdoor mall is under construction immediately north of Tsawwassen Mills. It will offer an additional 100 stores including anchor tenants; Wal-Mart, Rona, and Canadian Tire. Additional tenants include PetSmart, Marks Work Warehouse and Dollarama, among others. An A&W, Wendy’s and Starbucks will offer drive-throughs, and a Shell gas station is expected to open later in the year.

For customers in the Lower Mainland who will drive to the mall, there are 6,000 parking spaces including 75 for people with disabilities, and 14 stalls for electric vehicles. In an effort to entice customers from Vancouver Island, mall management has said that a complimentary shuttle will coordinate with the ferry schedules so people can leave their cars at home and walk on the ferries.

Getting to work
One challenge has been recruiting enough people for the 3,000 positions at the mall. Public transportation to Tsawwassen is very limited, primarily geared to serving commuters traveling to Vancouver in the morning, returning in the evening. Travel from Richmond and the Canada Line means using the Massey Tunnel against the rush hour. From the Surrey side, the Scott Road Station on the Expo line is a considerable distance from the mall. The cost of driving or using transit, combined with very limited transit options, have been factors in discouraging applicants. Two job fairs reportedly still did not produce the numbers of applicants expected.

In an effort to address the problem, a September 20 email to tenants announced that the mall will operate a shuttle service, every half hour, from 8:30 am to 10:30 pm, between the mall and Scott Road SkyTrain station. The fare will be $2 each way or $40 for a monthly pass. This will supplement the limited TransLink service.

Information on Tsawwassen Mills is available online a tsawwassenmills.com