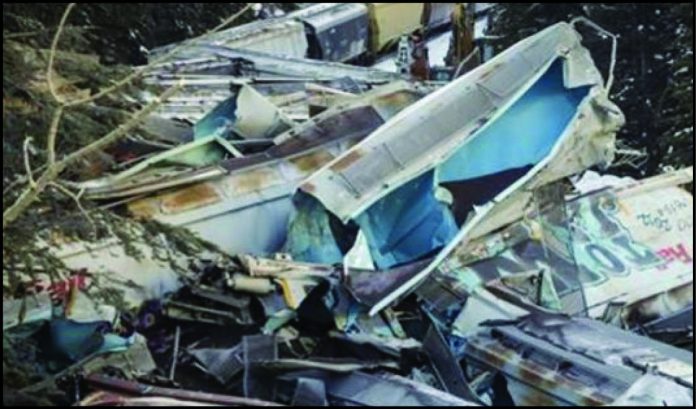 Calgary: Recovered in the rubble of a fatal train derailment near the British Columbia-Alberta boundary was an unfiled hazard report that outlined dangers with braking on that fateful stretch of track.
It was written by engineer Andrew Dockrell, one of three Canadian Pacific Railway employees who died on Feb. 4, 2019, when 99 grain cars and two locomotives plummeted off a bridge near Field B.C. The Transportation Safety Board of Canada said the report was penned the day before the derailment as Dockrell was working on the same section of track. Similar reports had been submitted for several years prior, the board said. “No risk assessment was conducted and insufficient corrective action was taken,’’ Kathy Cox, the safety board’s chairwoman, said Thursday when the final investigative report was released.
The report said the locomotive’s brakes failed under prolonged exposure to cold temperatures. It also highlighted systemic safety concerns in the rail industry.
The report said the train had been brought to an emergency stop by a different crew because they were unable to hold the train’s speed at or below the maximum (24 km/h) limit on the steepest part of the grid.
It said the engineer in that crew warned the trainmaster of brake system irregularities, but they were not seen as problematic.
“Because the situation was the first emergency stop, critical factors were not considered, and only the pressure retaining valves were applied, rather than the retaining valves and handbrakes,’’ said the report.
“In this instance, the trainmaster’s training and experience did not adequately prepare him to evaluate the circumstances or to make the decision he was tasked with.’’
A decision was made to continue the train’s descent with a relief crew.
Dockrell, conductor Dylan Paradis and trainee Daniel Waldenberger-Bulmer were delayed and arrived hours later. It was just before 1 a.m. on the frigid -28 C night that the train began to roll on its own.
It gained speed far above the limit for the mountain pass and hurtled off a bridge. Fox said the ordeal took about three minutes.
The investigation found brake cylinders on the freight cars were leaking compressed air and, worsened by their age and extreme cold, reached a critical threshold before the brakes gave out. “It reinforces the nature that accidents happen because of a complex convergence of a number of factors, any one of which if they didn’t happen could have prevented the accident,’’ said Fox.
In a statement, CP said the safety board misrepresented key facts. It challenged the board’s assertion that crews lacked experience or training. It also said its safety hazard reporting was effective in form and execution.
The company said it will address its concerns in greater detail with the safety board.
“CP strongly believes that real and substantive safety improvements are only achieved when fact-based and objective analysis is undertaken,’’ the statement said.
The board made three recommendations to Transport Canada to enhance the safety of train operations in cold weather.
It wants enhanced testing standards and requirements for time-based maintenance on brake cylinders for freight cars operating in similar terrain. It also calls for the installation of automatic parking brakes and for CP to demonstrate its safety management is effective.
“We can’t change the past. We can’t undo what’s happened. But what we can do is make recommendations, so these sorts of things don’t happen again,’’ said Fox.
The derailment prompted a criminal investigation by the RCMP, which it said is continuing with no timeline for completion. The families of two of the men filed a lawsuit last April alleging negligence against CP, its CEO, board of directors, CP police and the federal minister of transport.
Pam Fraser, the mother of Paradis, was given a briefing on the report Wednesday and said she relived the derailment all over again.
By Alanna Smith and Bill Graveland
The Canadian Press