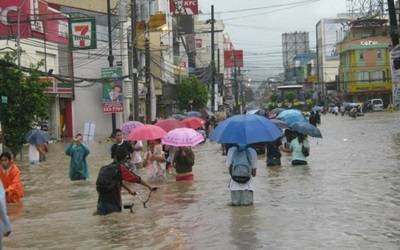 Manila, May 11 (IANS/EFE) At least two people died and 3,802 were evacuated as incessant rain and strong winds unleashed by typhoon Noul struck the northern Philippines, official sources reported on Monday.

A 70-year-old man and his 45-year-old son were electrocuted while trying to repair the electricity connection on the roof of their house in Aparri on Sunday, in the northern province of Cagayan, according to police sources cited by ABS-CBN television channel.

A total of 3,802 people or 1,029 families in Cagayan and Isabela provinces were evacuated as the typhoon passed over the region and continued towards Taiwan, said the National Disaster Risk Reduction and Management Council.

Authorities expect the toll to remain low thanks to preventive measures implemented since Friday, said the Inquirer newspaper.

On Monday, Noul was passing over Luzon island’s Batanes province with winds of up to 160 km per hour.

It should finish crossing the Philippines by Tuesday morning.

As the typhoon moves on, normalcy is slowly returning to affected provinces, with the restoration of services and the return of those evacuated.

National Grid Corporation of the Philippines said that it had restored electricity services to northern Luzon on Monday.

The Philippines experiences between 15 and 20 typhoons every year during the monsoon season, between June and November.