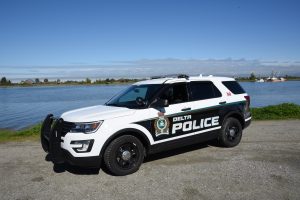 A Surrey man is facing four charges after two Delta Police officers were injured – one suffering significant injuries to his head – during an incident that took place on the long weekend.

Delta Police were called to Watershed Park around 9 am on Saturday, August 3. A member of the public reported a suspicious man in the park, and indicated to police that he left the area because he felt too uncomfortable to go on his planned run on the trails as a result of his encounter.

An officer arrived and located a man matching the description given, who began throwing rocks at the police vehicle upon arrival. The officer attempted to de-escalate the situation, but the man suddenly ran from police, and entered the driver’s seat of the police vehicle. The vehicle had no keys in it at this time.

The officer then requested Emergency Health Services and further police to attend the scene.

The officer continued to speak with the man in an effort to de-escalate the incident, but the man became more agitated.

At that time, concerned for his own safety and that of the public, the officer attempted to handcuff the man. However, the man allegedly punched the officer, then used the officer’s handcuffs, which had dropped during the altercation, to repeatedly strike the officer on the face and head. Despite receiving significant injuries, the officer managed to hold the man in place in the police vehicle.

Fortunately other officers in the area responded quickly, and managed to take the man into custody. During this process the man allegedly bit another police officer twice on the hand. He was subdued and then taken to hospital.

“Our officer received 23 stitches or staples for five separate lacerations to the face and head during this incident, and one of our other responding officers was bitten on the hand,” said Superintendent Harj Sidhu, head of the Community Policing Bureau. “Both officers will be okay fortunately, but we could have had a very different outcome. This underscores the dangers that police officers can and do face every day – even on what seems like a fairly standard call of a suspicious person.”

The man, aged 23, of Surrey, BC is facing four charges including assault causing bodily harm, assault a peace officer, utter threat to cause death or bodily harm and resist a peace officer.  He is currently being held for psychiatric assessment.