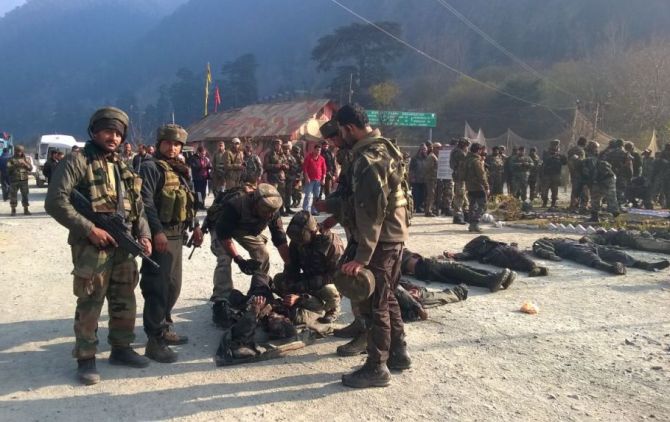 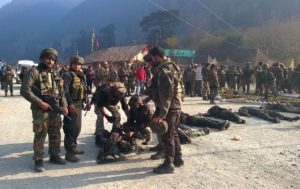 New Delhi: The terror attack on an Indian army camp in Jammu and Kashmir’s Uri base which killed 18 soldiers, has drawn condemnation from around the world, including Russia and the UN.

UN Secretary-General Ban Ki-moon expressed hope that the perpetrators of the Uri attack will be brought to justice and all stakeholders in the region will meet their responsibilities to maintain peace and stability.

The Russian Foreign Ministry in a statement condemned the Uri attack and said it is “concerned about the fact that, according to New Delhi, the army base was attacked from Pakistani territory”.

It called for the “criminal act” to be investigated properly and that “its organisers and perpetrators be held accountable”.

“We strongly condemn the terrorist attack against an army base in Jammu and Kashmir’s Uri in the early hours of September 18, which killed 17 and injured 30 service personnel. We offer our condolences to the families of the victims and wish a rapid recovery to all those injured,” the Russian statement said.

While condemning the terror act, China said it was concerned over the “rising temperatures” in its aftermath.

Beijing also asked India and Pakistan to resolve their differences through dialogue.

“China opposes and strongly condemns all forms of terrorism. We are concerned about this escalation and rising temperatures surrounding the Kashmir situation,” Chinese Foreign Ministry spokesman Lu Kang said.

France condemned the Uri terror attack and called for “decisive action” against terror groups targetting India, especially the Lashkar-e-Taiba, the Jaish-e-Mohammed, and the Hizb-ul-Mujahideen.

In a statement, the deputy spokesperson of the French Ministry of Foreign Affairs and International Development said that nothing can justify terrorism and that Paris remains “at the side of our strategic partner, India, for fighting this scourge”.

He said after the January 2 terror attack on the Pathankot air base, “this attack reminds us that India, like France, is a victim of terrorism. More than ever before, we remain at the side of our strategic partner, India, for fighting this scourge”.

“We call for decisive action to be taken, in accordance with international law, against the terrorist groups targeting India, particularly the Lashkar-e-Taiba, the Jaish-e-Mohammed, and the Hizb-ul-Mujahideen.”

“Nothing can justify terrorism, which must be combatted everywhere with the same determination,” the spokesperson said.

Canada strongly condemned the attack and said it stands with India in the fight against terrorism.

In a statement, Acting High Commissioner for Canada to India Jess Dutton said his country was appalled by these attacks.

In his message to Indian Prime Minister Narendra Modi, Nepalese Prime Minister Pushpa Kamal Dahal ‘Prachanda’ said he was of the firm belief that the perpetrators behind this heinous act will be brought to justice at the earliest.

The Sri Lankan Foreign Ministry said the country has undergone the scourge of terrorism for almost three decades and resents all forms and manifestation of terrorism.

Bhutan said it is “deeply concerned” at the “despicable” terror attack on Uri in India and called for the need to step up global cooperation to combat terrorism.

Bangladesh High Commissioner to India Syed Muazzem Ali, condemning the attack, told CNN-News18 news channel that the spirit of the 1971 Liberation War against Pakistan will remain in the relationship between New Delhi and Dhaka.

“As a freedom fighter of 1971, we fought alongside the Indians during our war of liberation, I want the spirit of 1971 to remain in our relations,” Ali said.

On Sunday, the US expressed strong condemnation of the terror attack.

“The United States strongly condemns the terrorist attack on an Indian army base in Kashmir. We extend our condolences to the victims and their families. The United States is committed to our strong partnership with the Indian government to combat terrorism,” US State Department spokesman John Kirby said.

British Foreign Secretary Boris Johnson said the UK “stands shoulder to shoulder with India in defeating terrorism and in bringing the perpetrators to justice”.