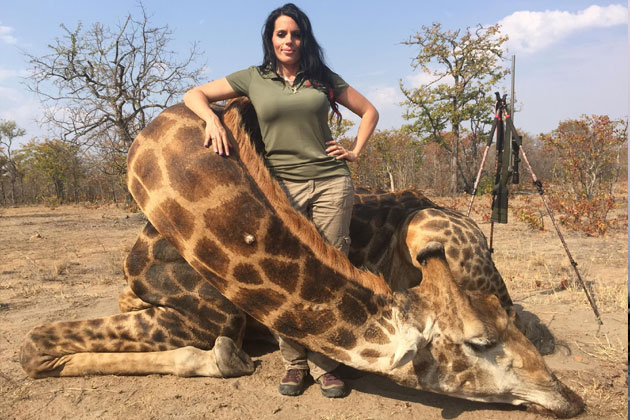 London, Aug 4 (IANS) Even before the uproar over the killing of an iconic black-maned lion named Cecil in Zimbabwe died down, a huntress from the US sparked fury on social media by posting a series of photos with her kills.
Sabrina Corgatelli uploaded pictures on her Facebook page with the corpses of a giraffe, warthog, kudu and impala — her kills during a trip to South Africa.
Before her trip, she posted a message: “To all the haters. Stay tuned, you’re gonna have so much more to be p***** off about,” the Telegraph reported on Monday.
In one photo, she was seen crouching over a massive kudu, an African antelope specie with a white-striped body and spiralling horns.
“Yesterday, day 1 an amazing day!!! Got my beautiful beautiful Kudu!! It was my #1 want on my list and I got him on the first day!!! Loving it there!!” she said.
Later the same day, she posted several of her pictures with the corpse of “an amazing old giraffe”, and wrote: “Such an amazing animal!! I couldn’t be any happier!! My emotion after getting him was a feeling I will never forget!!!”
Other pictures showed Corgatelli with a large, dead warthog, a blue wildebeest and an impala.
Thousands of people posted on Corgatelli’s profile branding her as “deranged”, “heartless” and “the definition of disgusting”, the report said.
Corgatelli, an accountant who also runs a clothing company called Racks and Ridges, also posted a photograph of her boyfriend with the body of a 13-foot crocodile.