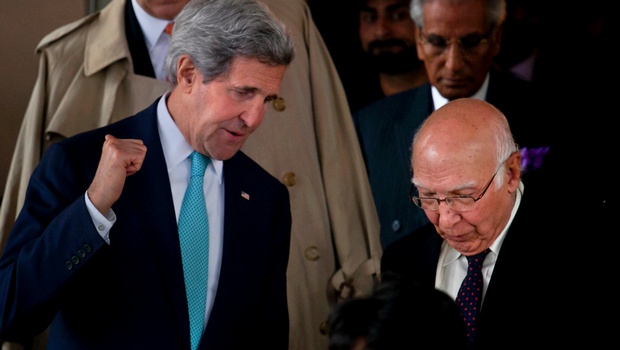 Islamabad, Jan 13 (IANS) The US will provide Pakistan $250 million in addition to the billions of dollars of military aid already spent, Secretary of State John Kerry said here Tuesday

He said the amount will come in the form of food, shelter and other assistance to help people displaced by the conflict in tribal areas, The News International reported.

Pakistan must fight militant groups that threaten Afghan, Indian and US interests, the US secretary of state said.

Speaking alongside Kerry, Sartaj Aziz, advisor on foreign affairs to Pakistan Prime Minister Nawaz Sharif, made a plea to the US to keep giving Pakistan money to help rebuild the regions where the Pakistani military has been fighting militant groups.

“We expect our defence forces to remain engaged in counter-terrorism operations for some time in the foreseeable future,” Aziz said.

“Continuation of coalition support fund reimbursements is therefore a valuable support that must continue in the interests of both countries,” he added.

Visiting Pakistan after going to India over the weekend, Kerry said all militant groups should be targeted to bring security to the region.

“Terror groups like the Tehreek-e-Taliban (TTP) Afghan Taliban, the Haqqani network, Lashkar-e Taiba, and other banned groups, continue to pose a threat to Pakistan, to its neighbours, and to the US,” he said.

Most US-led forces in neighbouring Afghanistan officially completed their combat mission last month, prompting concern about the stability of the region where insurgents have been increasingly aggressive in past months, following the Dec 16 Taliban attack on the Peshawar Army Public School, which left over 140 students and teachers dead.

Pakistan has promised to stop differentiating between “good” and “bad” militants and to step up operations against their hideouts on the Afghan border.

“It will be seen over the next days, weeks, months, how extensive and how successful this effort is going to be,” Kerry said.

“The tragedy of Dec 16 was really a reminder of the serious risks of allowing extremists to find space and command that space and operate within it.”

Kerry added that he was deeply concerned by recent violence on the border dividing the disputed Himalayan region of Kashmir, and called on India and Pakistan to find a diplomatic solution.

“It is profoundly in the interests of Pakistan and India to move this relationship forward,” he stated.

Upon his arrival, Kerry was presented with a guard of honour and he later laid a floral wreath at the martyrs’ memorial.

The top US diplomat discussed Pakistan-US relations along with the overall security situation and stability in the region including Afghanistan with Gen. Sharif.