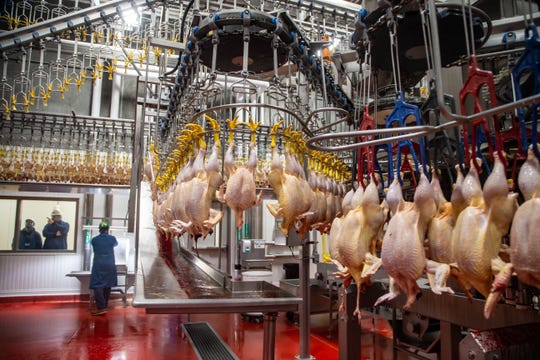 Victoria: A chicken processing plant in Vancouver has been closed after 28 workers tested positive for COVID-19, the provincial health officer said Tuesday.
Dr. Bonnie Henry said a COVID-19 outbreak has been declared at the United Poultry Co. Ltd. operation in east Vancouver.
Vancouver Coastal Health officials said one worker at the plant was diagnosed with COVID-19 on Sunday, which prompted officials to test more employees on Monday.
“The plant has been closed and the close contacts have been notified of the people we know,” Henry told a news conference.
United Poultry could not be reached for comment Tuesday.
Its website says the company was established in 1968 and provides poultry products to businesses in the Lower Mainland, the Sunshine Coast, Squamish, Whistler, Pemberton and the B.C. Interior. It says the family business is “fully committed to the health and safety of our clients, their customers and our staff.”
Vancouver Coastal Health and the Canadian Food Inspection Agency are leading the investigation into the outbreak at the plant, Henry said.
Henry also reported 25 new COVID-19 cases Tuesday, bringing the B.C. total to 1,724. She said there was one death, a senior citizen who was living at a Vancouver area long-term care home.
There have now been 87 COVID-19 deaths in B.C. Henry said 1,041 people have recovered from the disease.
Henry said B.C. officials are concerned about the COVID-19 outbreak at the chicken plant and will inspect company’s other operations.
“We need to make sure things are being done appropriately,” she said.
Henry said there is no evidence that COVID-19 can be spread from the chicken plant’s products to people, but handling raw chicken poses bacteria dangers and must be conducted with proper hygiene.
“We don’t have any evidence that COVID-19 can be spread from meat and from consuming of products like that or from packaging on meat or chicken in this case,” she said.
A news release from Vancouver Coastal Health said the Canadian Food Inspection Agency has determined no recall of the chicken products distributed from the plant is required.
B.C. is also watching events in Alberta where almost 500 COVID-19 cases have been diagnosed at two meat-packing plants, said Henry.
Cargill announced Monday it would temporarily shut down its plant just north of High River.
On Tuesday, the outbreak at the Cargill plant stood at 401 cases, including the death of one worker. Another 114 cases in the community are being linked to the meat-packer.
The JBS Canada plant in Brooks had recorded 77 cases as of Tuesday.
Henry said the plant in Vancouver operates differently than those in Alberta. In B.C., workers do not live in communal settings as they do in Alberta.
But Henry said all B.C. workers must remain vigilant about staying away from work if they are feeling sick.
“If there is illness in the environment, people need to be staying home,” she said.