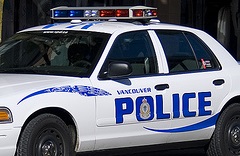 Vancouver: One man has been arrested and is facing ten charges related to alleged break-ins at four Vancouver businesses.

The VPD’s Property Crime Unit is investigating a string of break-and-enters that began on December 22nd last year, when someone broke into a video game development studio and stole over $100,000 in property. Investigators looked into other crimes in the area, and based on the information collected, they believed one person was responsible for several break-ins.

On January 12th, someone broke into the BC Professional Fire Fighters’ Burn Fund office and stole laptops and a safe. Investigators seized surveillance video and immediately recognized the suspect from previous break-ins. The video also showed a stolen Mercedes SUV leaving the area, just after the thief left the office.

Two days later, officers located the suspect driving the Mercedes, and with the assistance of a VPD Canine Unit, were able to arrest him when he parked it in Richmond. Various pieces of the stolen property were recovered.

Thirty-five-year-old Vancouver resident Matthew Robert Barber has been has been charged with the following offences:

Barber remains in police custody, and is scheduled to appear in Provincial Court this morning. Detectives continue to look at potential links between these offences, and other thefts in the city.