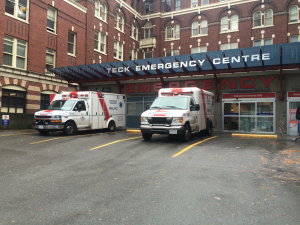 Vancouver: A man has been arrested after two VPD officers were injured during a violent confrontation early Monday morning in downtown Vancouver. One of the officers is still recovering in hospital.

Just before 2 a.m. on January 15, two patrol officers were parked on Granville Street near Helmcken Street when they were physically confronted by 44-year-old, Paul Eddison, from Penticton. He was in an agitated state.

Mr. Edison was eventually brought under control and arrested, but not before he allegedly caused several physical injuries to the officers. One officer sustained a compound leg fracture and the other sprained several fingers.

The officer with the broken leg required emergency surgery and is recovering in hospital. The second injured officer was treated at hospital and released.

“Our frontline patrol officers deal with challenging situations on a daily basis. They are required to continually get in harm’s way to protect the citizens they serve,” says Sergeant Jason Robillard, VPD. “We wish our injured officers a speedy recovery.”