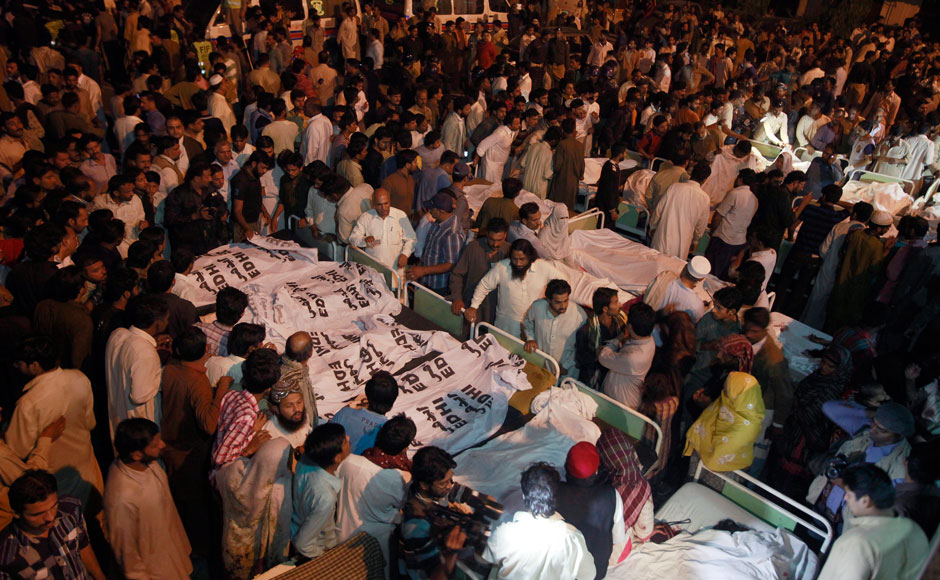 Islamabad: The death toll in the ghastly suicide attack at the border with India in Pakistani Punjab rose to 60 Monday with some of the wounded people battling for life in hospitals.

As Pakistanis tried to come to grips with a horror clearly directed at civilians, Prime Minister Nawaz Sharif pledged to pursue his military drive against Islamist militants blamed for the attack.

At least 59, probably 60, people were killed and more than 120 injured when a young suicide bomber wearing a suicide vest blew himself up not far from the Wagah border Saturday evening.

The deafening explosion tore through scores of men, women and children returning from the daily flag lowering ceremony held at the border by the Pakistan Rangers and India’s Border Security Force (BSF).

The event, popular on both sides of the border, draws an unusually high number of visitors, tourists included, on Sundays.

The Nation newspaper reported Monday that the death toll could go up as the condition of over a dozen of the injured was “very critical”.

The daily quoted a survivor, Asif Rashid, as saying that the blast, just 10 minutes after the ceremony, was “huge, very powerful”.

“It was like doomsday. I saw it with my eyes,” he said at the Services Hospital where he was taken to treat minor injuries on his foot. The man had gone to the border with his wife to see the ceremony.

Another witness described the bombing as terrible and appalling.

“I rushed to the scene and saw scattered bodies, human flesh, injured men, women and children on the road,” the witness, identified only as Khan, told the Nation.

Pakistani media reported that a state of high alert had been declared across Punjab.

After the explosions, relatives of the victims were seen urging people to donate blood.

“It was a suicide attack. The bomber had been waiting for the people outside the parade venue and he detonated his explosives minutes after the ceremony ended,” Rangers Director General Tahir Javaid Khan said.

The responsibility for the attack was claimed separately by the Jundullah and Tehreek-i-Taliban Pakistan-affiliated Jamaat-ul-Ahrar outfits.

Prime Minister Sharif condemned the bombing — the attack was also denounced by Indian Prime Minister Narendra Modi and the US — and said that military operations against Islamist militants would continue.

Two of the four posts had been set up after a threat to the event was reported by intelligence agencies Sunday morning.

Evacuee Trust Property Board chairman Siddiqul Farooq said the safety of over 2,000 Sikh pilgrims set to reach Lahore Tuesday for the three-day birth anniversary celebrations of Guru Nanak would be ensured.

“The suicide attack looks like a security lapse. I will ensure this does not happen again, particularly when over 2,000 Sikh pilgrims arrive at the Wagah railway station,” the Dawn quoted him as saying.

He said the terrorist may have reached the spot through nearby fields.

On Monday, overland border trade between India and Pakistan was halted for another two days, Indian officials said.

Hundreds of trucks from both countries carry goods, including fruits and vegetables, through the Wagah border.

The daily flag lowering ceremony has also been suspended for three days.

In an editorial, the Dawn said the Pakistani state was clueless how to fight terrorist groups holding the country to ransom.