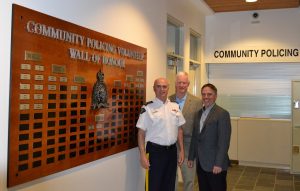 Part of the evening ceremony was the unveiling of the honour board that is placed in the public foyer. This acknowledges North Vancouver volunteers for their community policing hours and their ongoing commitment to the Community Policing Centres. Recognition is given at milestones of 300 hours up to 3000 hours. (Two names were added to the 3000 hours section!)

North Vancouver RCMP Supt. Chris Kennedy along with Mayor Richard Walton and Mayor Darrell Mussatto of North Vancouver helped celebrate and acknowledge the much appreciated work done by the numerous volunteers in the various community policing programs and services.