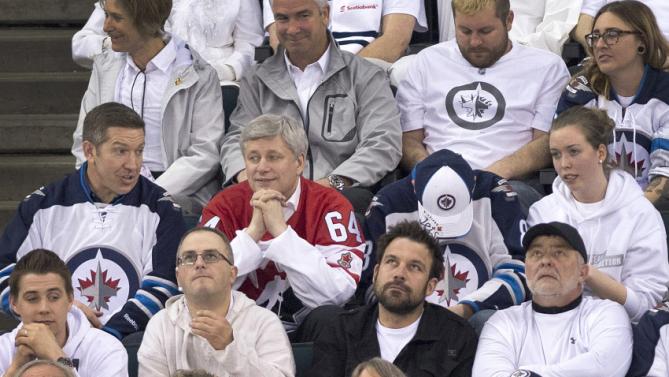 The Canadian Press
WINNIPEG: Prime Minister Stephen Harper has explained his Jets wardrobe malfunction.
Harper’s choice of jersey raised a few eyebrows when he was spotted at the Jets playoff game in Winnipeg on Thursday.
Rather than sporting the home team’s colours, Harper wore a modern-era white Canada jersey.
Asked about the choice, Harper explained that staff were going through his jerseys and knew he needed a white one to keep with the tradition of Jets fans wearing white during the playoffs.
They grabbed the two white jerseys he had and, when he opened his suitcase, he had to decide between the shirt he ended up wearing and a 1972 Canada jersey signed by Paul Henderson and given to him as a gift.
Harper said there was no way he was wearing the signed jersey to the game.
Maybe he should have.
The Jets lost to Anaheim 5-2 and were swept from the playoffs.
© 2015 The Canadian Press