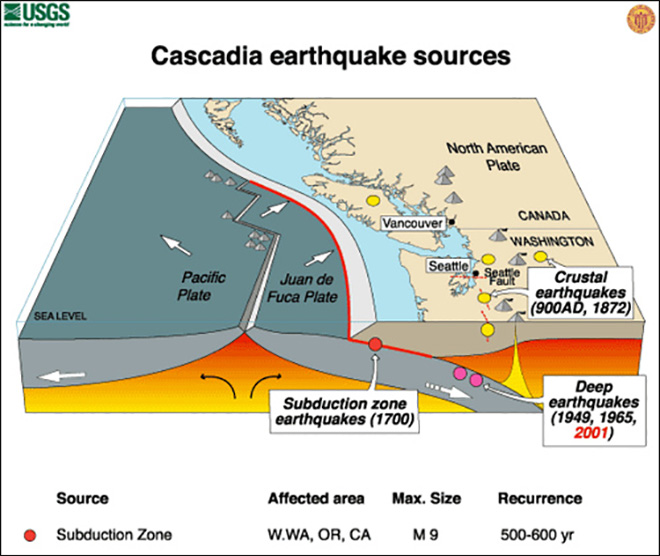 – When the subduction quake strikes

In the second part of this exploration of earthquake risk and awareness, we speak with Dr. John Clague, Professor of Earth Sciences at Simon Fraser University and an Emeritus Scientist of the Geological Survey of Canada, about what to expect when the Cascadia fault, on the Juan de Fuca plate, unlocks and over three hundred years of strain is released.

John Clague: We do know that the Juan de Fuca plate, which is our oceanic plate, is moving northeast at about 45 mm per year, (almost 2 inches) beneath North America.  Currently the North American and Juan de Fuca plates are locked against one another creating strain.  There’s plenty of evidence that strain is accumulating, and it takes a lot of built up stress to cause it to slip. That’s probably partly why we have these relatively long intervals between these earthquakes.

Asian Journal:  We often hear about liquefaction threatening Richmond.  Is this a concern in places like the Langley and Sumas prairies, the Serpentine and Nicomekl lowlands?

John Clague: You’re more likely to get an earthquake closer to Vancouver than you are to Aldergrove. But the studies do include those areas because these are made up of alluvial soils, river soils that are water-saturated and granular and that’s the type of soil that will liquefy. In Richmond there’s a cap of clay on top of these sands, which is a perfect situation for liquefaction because the sands extend from about three metres down to more than ten metres, they are nice and clean, there’s lots of water, and they don’t have the weight on top necessary to prevent liquefaction. Unfortunately, these soils are so close to the surface that they are highly liquefiable. That’s the problem that Richmond is going to face if the ground shakes.
With liquefaction the ground will settle unevenly. You get these sand volcanoes which happened in the earthquakes of the early 1800’s in the New Madrid fault area of the US. Two hundred years later they are still clearly visible from the air. It also happened a lot in the Christchurch area. Now, nobody dies from liquefaction but many of your utility lines and services take a beating. In Richmond many homes are built on a concrete slab so if you get any liquefaction that will crack.

Asian Journal:  What about the danger of landslides?

John Clague: Around southwestern BC we are likely to get blockages along our major transportation corridors. The Fraser Canyon has very steep slopes comprised of highly fractured rock as does the Sea to Sky highway, and in serious earthquakes you could have these corridors disrupted for weeks. Other vulnerable areas would include the Tsawwassen and Ocean Park Bluffs, the UBC escarpments, and the North Shore.

Asian Journal: Can you talk about the impact of a subduction earthquake??

John Clague: Last week, we talked about magnitude six and seven quakes where the energy dissipation from those is pretty rapid.  With a magnitude 7 you’re looking at damage within about a 100 km radius, decreasing out to the edge of that radius, and with a magnitude 6, a 30 km radius or so. The Christchurch quake was only a magnitude 6, but it was only seven km from the city centre and there was only 10 seconds of steady ground shaking. But it was a hellish 10 seconds that caused $20 billion of damage. So the scenario you’d expect in a close-in shallow crustal earthquake is very strong shaking with liquefaction on a large scale, and you’d get rock-falls and landslides.  I would think most of the downtown would be okay.  I wonder about the west end because those tall towers there were built more than fifty years ago. And the aspect of damage is a factor of the length of shaking, which scales with magnitude.  With the magnitude six Christchurch earthquake, it was ten seconds. In a seven magnitude it’s thirty to forty-five seconds, and over eight it’s up to about three or four minutes. But the difference here is the subduction source is two hundred kilometres away. If you were close to the source it would be just like these crustal earthquakes, with strong shaking for three to five minutes that would seem like it’s going on forever. But as you get away from the source, the nature of the shaking changes.  There’s a partitioning of the energy so as you go farther way you experience the rolling low amplitude energy. By the time the earthquake waves arrive in Vancouver from the west coast of the Island, it would be like a rolling motion at sea. It’s not what people think of as an earthquake but still that oscillating can trigger liquefaction, and be particularly damaging to tall structures that resonate with that energy, or long structures such as the Massey tunnel.  The reason is because you get an oscillation or resonance effect that can actually tear buildings apart.  In Mexico City, ten-thousand people died when ten story buildings collapsed due to a resonance effect, and that was a couple of hundred miles from the epicenter of an 8.5 earthquake.

Asian Journal:  So what is the current advice in a quake, should you stay in the building, or get out?

John Clague: Normally people should stay inside. I know it’s a natural instinct to get out of structures in a situation like that, and I’m not sure I wouldn’t have that same reaction as well, but people are injured outside of buildings when facades or glass fall into the street. You typically get a series of after-shocks soon after a quake like that, which can bring more debris down into the street, so outside isn’t a good idea unless there’s a very strong reason such as concern the building might collapse. The emergency people are now recommending that people get under a desk or table, to protect against ceiling collapse or other falling debris.  You need to hold on to that desk or whatever so you stay protected, and finally cover your head as best you can.

It’s critical to survival be prepared.  For more information on developing a household plan, an emergency kit and other information please go to:  www2.gov.bc.ca/gov/content/safety/emergency-preparedness-response-recovery/preparedbc/know-the-risks/earthquakes