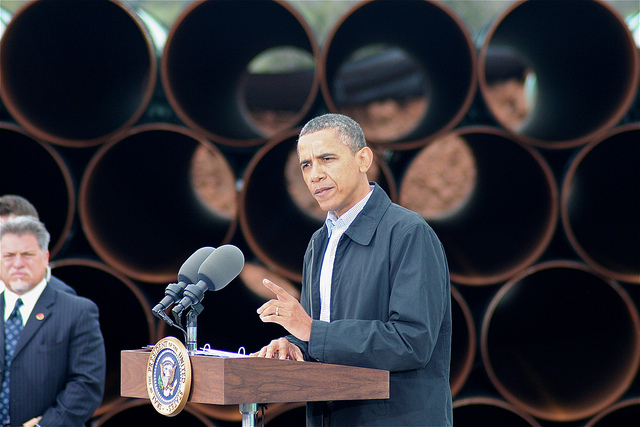 By Alexander Panetta, The Canadian Press
Washington: The White House says a decision will be made on the Keystone XL pipeline while President Barack Obama is still in office, as rumours swirl that the long-delayed project is on the verge of rejection.
It’s not saying when the decision will come or what it will be.
A spokesman for the president was asked Wednesday about the issue after a Republican lawmaker declared that he’d heard from his sources that the Canada-U.S. pipeline will be rejected in an announcement next month.
Spokesman Eric Schultz wouldn’t confirm or deny that rumour, which had been circulating around the U.S. capital before Sen. John Hoeven raised it this week on the Senate floor.
“I’m not sure I would classify (Hoeven) as a confidant of our State Department,” Schultz said, noting that the process belongs to the administration, not Congress.
When pressed whether a decision will come during Obama’s remaining year-and-a-half in office, however, he replied: “Yes.”
Any imminent pipeline decision could become an issue in national elections in Canada and the U.S., as different parties point fingers over how the file was handled.
In the U.S., the administration got a preview Wednesday of one possible line of questioning Democrats could face in the run-up to the 2016 presidential election.
A White House reporter asked about whether there’s a disparity in the way the administration is treating its neighbour, Canada, compared with its handling of long-standing rival Iran.
The White House has given lawmakers 60 days to decide on a nuclear deal that would allow Iran to boost oil exports, while it’s taken years to decide on an oil export pipeline for Canada.
Schultz said the two files can’t be compared: “For us those are entirely separate and unrelated issues.”
As for the Canadian government, it’s taken the position that Keystone will be built eventually _ with or without Obama.
Prime Minister Stephen Harper once called it a “no-brainer,” and he’s again described it as inevitable. Harper said in an interview that the project made sense from an economic and environmental standpoint and would happen eventually even if the signals from the current president looked ominous.
“I think there’s very peculiar politics of this particular administration,” Harper told Bloomberg.
“I believe that whether this project goes ahead or not under this administration, it will ultimately go ahead under a subsequent administration.”
However, it could first become a wedge issue in the 2016 vote. Democratic front-runner Hillary Clinton has refused to state a position on the pipeline, as members of her party’s left-leaning base urge her to oppose it.
Meanwhile, the Republicans are staunchly in favour and are attacking Clinton for her silence.
© 2015 The Canadian Press