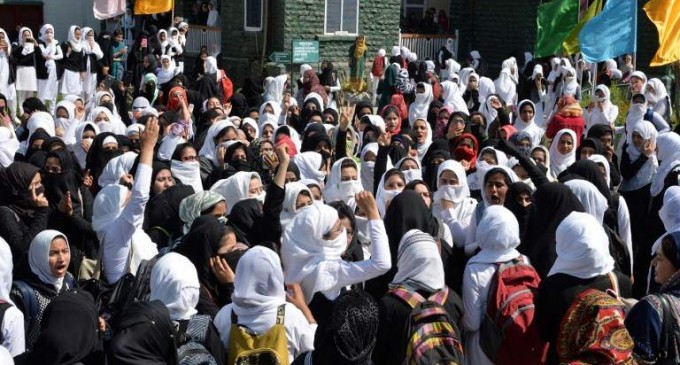 Srinagar: Widespread protests by students in the Kashmir Valley on Monday heightened tensions as dozens of students and policemen were injured in clashes.

The students had called for protests against Saturday’s incident in Pulwama town in which over 50 students were injured in fighting with security forces after objecting to the setting up of a security post outside the college.

Security forces had entered the Pulwama college on Saturday.

Students of S.P. College in Srinagar blocked the Maulana Azad Road on Monday as police used tear smoke in a bid to clear it.

The students resorted to massive stone pelting at the police, resulting in injuries to the Station House Officer of Kothibagh police station and two of his guards.

Three students were also injured in the clashes.

Police used dozens of tear smoke shells to disperse the students who kept regrouping to engage the police on the streets.

Girls from a women’s college in Srinagar also joined the protests as police battled hard to bring the situation under control.

Protests and clashes also erupted between students in Pulwama town despite the authorities having ordered the closure of the college there for two days following Saturday’s incident.

Protests took place inside the Kashmir University and the Central University here but these were peaceful.

Reports said over three dozen students and two dozen security men were injured in Monday’s clashes in the Valley.

Police said they were maintaining “extreme restraint” while dealing with the student protests.