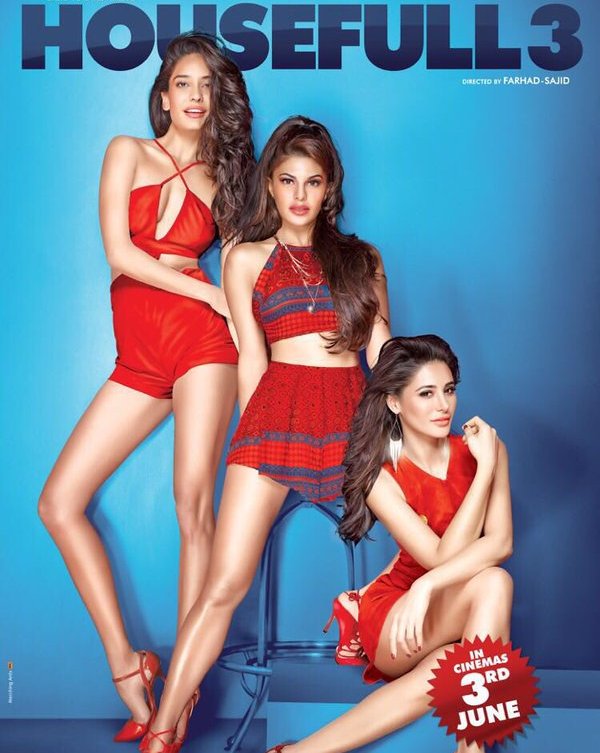 With Sajid Nadiadwala’s HOUSEFULL 3 starting in 3500-4,000 screens in India and 750 around the world, there’s widespread expectation from Sahid-Farhad directed film to break all records and become the biggest hit in comedy franchises. It all started with Rohit Shetty’s GOLMAAL

(2006) with Ajay Devgn, Arshad Warsi, Sharman Joshi and Kareena Kapoor and the film surprised all as the slap stick comedy became one of the biggest comedy hits. Overjoyed with the success, Ajay Devgn and Rohit Shetty joined forces again for Golmaal Returns (2008) and the result was a resounding success, though Sharman Joshi was replaced by Tushaar Kapoor. The franchise tasted success again in 2010 with Golmaal 3, and Rohit Shetty and Ajay Devgn are now working on Golmaal 4, which is expected to release towards the end of 2017. 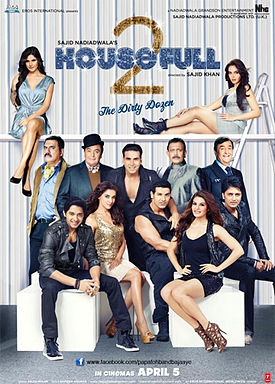 Nadiadwala’s  Hera Pheri is another popular franchise and many have hailed it as the best thus far. Akshay Kumar, Sunil Shetty and Paresh Rawal were simply too good and it didn’t take too long to follow it up with another hilarious comedy sequel Phir Hera Pheri which once again was huge winner at the box-office. Nadiadwala didn’t take too long to announce HERA PHERI 3 but Akshay Kumar opted out over renumeration, and though Abhisheik Bachchan and John Abraham were roped in, the film just never got started. The latest is that Akshay Kumar is back in the franchise.

When Ekta Kapoor announced Kya Kool Hai Hum with Tushaar Kapoor and Riteish Deshmukh, not much was expected as both are considered light weight, however, the double meaning dialogues became a rage and the film belied all expectations to become one of the big hits that year. The success prompted Ekta Kapoor to announce Kya Super Kool Hai Hum, which did even better business! And though Riteish Deshmukh was replaced by Aftab Shivdasani, Kya Kool Hai Hum 3 also became a hit at the box-office. 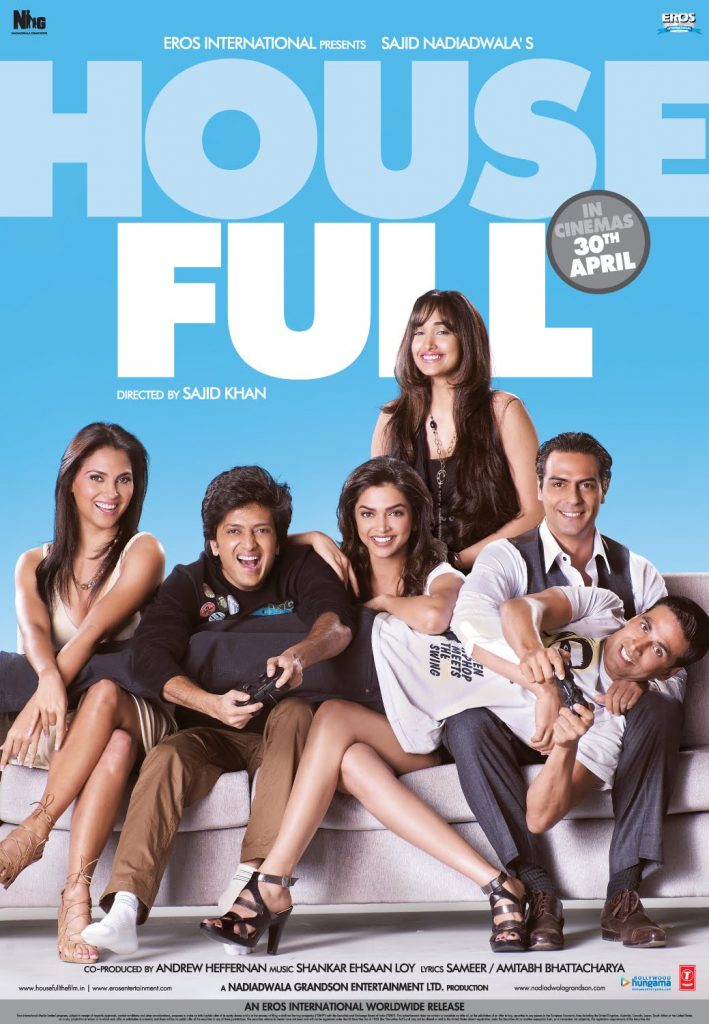 Riteish Deshmukh and the film surprised all pundits as it became a huge hit. Inder Kumar followed it up with the same cast in sequel Grand Masti, which did even better business and now, the entire team is working to give the final touches to Great Grand Masti (2017).

Talking of comedy franchises, one has to mention Arbaaz Khan’s Dabangg, which gave new life to Salman Khan as it became the biggest hit of his career, only to be beaten by Dabangg 2, which catapuled Salman to the top and made him the box-office champ. Dabangg 3 is expected in 2017 and going by Salman’s career graph, that too will make or break some records as the Dabangg series remains the highlight of Salman’s career and even of comedy franchises in Bollywood.

Anees Bazmi’s Welcome had some of the biggest stars as Akshay Kumar, Anil Kapoor, Nana Patekar, Feroze Khan joined some other top guns and bingo – the film became a huge hit. Firoz Nadiadwala and Akshay Kumar disagreed over renumeration and Welcome Back (2015) welcomed almost the entire cast back again without Akshay Kumar and Feroze Khan (who had passed away) and yes, it was even a bigger hit and yes, Welcome 3 will start shooting soon.

This brings us to Sajid Nadiadwala’s Housefull which despite being thrashed by critics, made Rs.75.5 crores and inspired many more. Once again, Housefull 2 followed the same comedy gigs and Akshay, Riteish and John Abraham excelled again as the film collected Rs.110 Crores to become the second comedy hit of Nadiadwalas.

Busy in his home productions, Abhishek Bachchan was roped in for John Abraham with Nargis Fakhri as his lady love and Jackie Shroff as the villain and if the response to the songs is any indication or the fact that more than 14 million have seen the trailer, Housefull 3 is sure going to thunderous opening response this week. With Akshay Kumar riding high after the success of Airlift this year, it seems there’s no stopping him and with Abhisheik Bachchan, Riteish Deshmukh, Jacqueline Fernandez, Lisa Haydon, Nargis Fakhri, Jackie Shroff and Boman Irani supporting him, it seems that Sajid Nadiadwala’s latest could set some new box-office records for this year and may become the biggest comedy franchise in the history of BOLLYWOOD!

Veteran actor Razak Khan, who made the characters of Ninja Chacha, Lucky Chikna, Fainku, Babu Bisleri and Popatwala popular through his various roles in Hindi films, passed away in Mumbai on June 1st after suffering a massive heart attack. Razak, who did various roles with popular actors like Shahrukh Khan, Salman Khan and Aamir Khan was very popular with his co-actors and will surely be missed. Rip Razak Khan!

Riteish Deshmukh, who has been busy promoting his upcoming film Housefull 3, became the proud parent again of a healthy baby boy at Lilawati Hospital on June 1st. Congratulations to him and his wife Genelia!

…. and she’ll be emceeing the Johny Lever Live on Saturday, June 11th @ Hard Rock Casino. Winner of Vancouver’s 2011 Funniest Comic and winner of BC’s Funniest Female Contest in 2014 and 2015, Ash Dhawan is one of the brightest female comedienne who’s excelled in various platforms and she’s obviously delighted to showcase her talent in front of India’s most popular comedian Johny Lever. South Asian comedians have been making a mark in local and national scene for some time but Ash is perhaps the only South Asian female to make an impact and it sure is an honor to haver her perform on Johny Lever live, so come out and support the local talent along with India’s funniest on June 11th at Hard Rock Casino, Coquitlam. Tickets are available at Kamal’s Video Palace and online at www.ticketmaster.ca.

Writer and lyricist Farooq Barelvi has taken the entire team of Housefull 3 to court under section 420, 406, 379 and copyright act for using his script of Tigdambaaz and not giving him the credit. Case was filed against producer Sajid Nadiadwala, directors Sajid-Farhad and actor Akshay Kumar in a Mumbai court and it’s to be seen how it’ll be resolved. Veerappan, Waiting and Phobia failed to generate excitement at the box-office and even last week’s release of SARBJIT couldn’t get much footfall to benefit, however, all eyes are on Housefull 3, which is a solo release and surely generating much more excitement. Shailendra Pathak, Ayesha and Simran invite you all for an evening of melodious gazals on Saturday, June 4th at Surrey City Hall and it’s appropriately called Come Alive to Melody!

With that it’s time to say goodbye but not before reminding you all to watch the final episode of some classic moments with the ‘ Singing Sitar ‘ of well-known Sitarist Pandit Harvinder Sharma on Sunday, June 5th @ 1 PM on SMC#116.