Asian Journal
Home Columnists Will it be hat trick for R.Balki & Amitabh with Shamitabh!!! 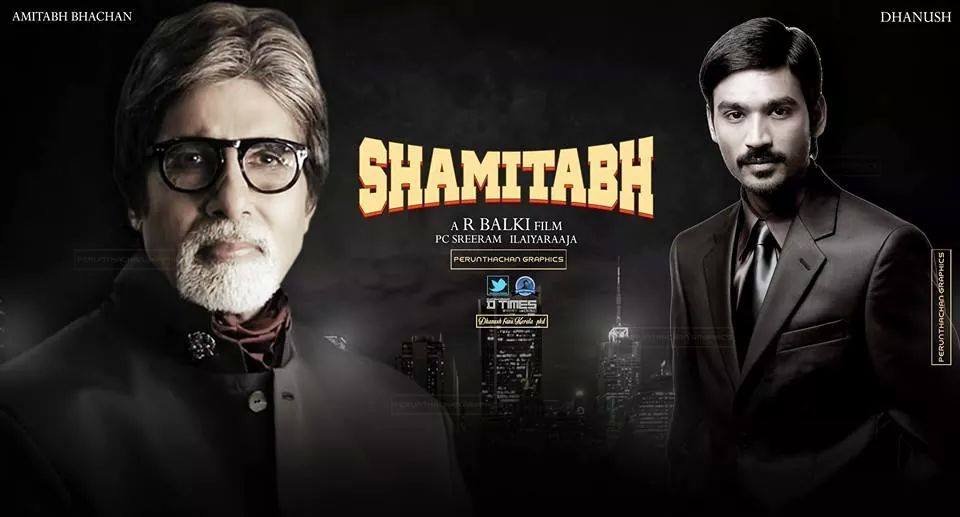 “I’m Actor’s Director”, says R. Balki and this could be the reason for Amitabh Bachchan & R. Balki getting together for the third time for their latest venture Shamitabh, which opens on Friday, February 6th all over the world. R. Balki started as an ad maker and impressed Amitabh Bachchan during one of those sessions and got him convinced to act in his very first film Cheeni Kum (2007) romancing Tabu, almost half his age, and so convincingly that not only the audience but even Tabu and co-star Paresh Rawal were impressed. The unconventional film swept the audiences and the film was declared a success with critics and the box-office as well. But what followed shocked the entire Bollywood film industry as R. Balakrishnan challenged the histrionics of Amitabh Bachchan and presented the 67 year old as a young boy suffering from in PAA (2009) with his son Abhishek Bachchan as his Dad & young Vidya Balan as his Mom. The film surpassed all expectations as it was nominated in almost all major categories and swept most of the awards including the National Best Actor award for Amitabh Bachchan and PAA was declared a major critical success. Post the success of Paa, Amitabh did some inconsequential films while Balki produced Sri Devi’s come back film English Vinglish, which was directed by his wife Gauri Shinde, but both were yearning to work again and more than anything, Balki was looking for a challenging script to approach Amitabh again and finally he did, with Shamitabh.
Now obviously, the film is going to be different as both keep challenging each other but how different is something we all will have to wait for a while. That Amitabh Bachchan’s co-stars are Kollywood’s Dhanush (Rajinikanth’s son-in-law, who made his debut in Hindi films with Ranjhana) and Akshara Haasan, the younger daughter of Kamal Haasan & Sarika, is a surprise itself but there’s more in store as prominent directors Rakeysh Omprakash Mehra, Vinod Chopra & Mahesh Bhatt, along with Rekha & Abhishek Bachchan have cameos as well. With a publicity blitz, unrivalling Amitabh’s previous efforts, which took the stars from London to Dubai, the film is one of the most eagerly awaited films of 2015 and the success or failure would probably determine if there’ll be another attempt by Baamitabh ie. Balki & Amitabh!
Vidya Balan to play Pakistani Prime Minister Benazir Bhutto!!! 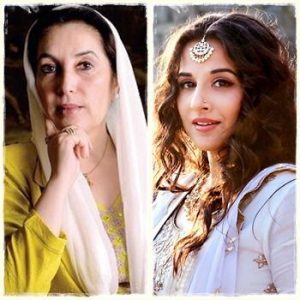 With the success of Bhaag Milkha Bhaag & Mary Kom, based on the life of athlete Milkha Singh & Boxer Mary Kom, more and more producers are announcing biopics. Ketan Mehta’s Rang Rasiya was about painter Raja Ravi Verma while Sanjay Leela Bhansali is busy making Bajirao Mastani, a period film about the romance of Bajirao & Mastani, and now we hear that Vidya Balan has been confirmed to portray Benazir Bhutto, the former Pakistani leader who was assassinated in her comeback attempt. Vidya Balan, who reprised the role of actress Silk Smitha. In The Dirty Picture and won national & international awards, was always the strong contender for the pivoted role and if all goes well then the film could start by the end of this year and yes, we all agree that Vidya Balan would do full justice to the challenging role !
Karan Johar in hiding after police case against AIB Roast!!! 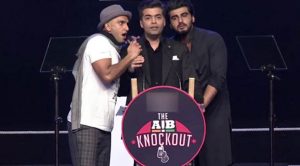 Bollywood is in turmoil as twitter war continues with some stars supporting and some speaking against the AIB Knockout Roast. It all started when Karan Johar hosted a panel of stand-up comedians & journalists under AIB to roast Bollywood’s hottest youngsters Arjun Kapoor & Ranveer Singh at a Mumbai stadium where they raised Rs. 4 million for various charities but all hell break loose when the edited version was uploaded on You Tube and within hours it’d 8 million hits and that’s when various organisations like MNS, All India Brahmin Samaj approached Maharashtra Culture Minister Vinod Tawde & Chief Minister Devendra Fadnawis against the abusive language used in the roast. The video was quickly withdrawn from You Tube as the Federation Of Western India Cinema Employees (FWICE) with backing of 22 Bollywood related organisations demanded an apology from Karan Johar, Ranveer Singh, Arjun Kapoor, AIB and Bollywood personalities like Deepika Padukone, Sonakshi Sinha, Alia Bhatt & Sanjay Kapoor, who’re seated in the front rows amongst 4,000 audiences. Karan Johar’s friends SHAHRUKH & SALMAN KHAN have been quiet so far while Amitabh Bachchan said that abusive language should not be used in public and that could be the reason for Karan Johar’s withdrawal from public. Meanwhile, police cases have been registered against all the participants in Mumbai & Pune, which could escalate further in days to come!
Ismail Darbar arrested! 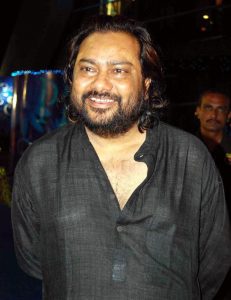 Popular music director Ismail Darbar of Hum Dil De Chuke Sanam & Devdas fame was arrested and released on bail after an assistant director lodged a police complaint alleging that Ismail Darbar & his son assaulted him in Mumbai after an altercation over unpaid dues. Meanwhile, Arjun Rampal has been summoned by Mumbai police for meeting dreaded gangster Arun Gowli at a hospital to discuss his role in a film. As per the reports, Arjun Rampal is reprising the role of gangster Arun Gawli for his upcoming film Daddy and met him while the gangster was at a hospital for check-up, which is against the law and hence the summons. Aishwarya Rai Bachchan has started the shoot for Jazbaa, which is her first film after Guzaarish and motherhood; Khamoshiyaan, Rehasya & Hawaizaada all failed to make an impression at the box-office and this is despite the fact that Hawaizaada has `been declared Tax-Free in UP & Madhya Pradesh, Meanwhile, Neeraj Pandey’s Baby continues to perform well and has already collected Rs. 85 Crores in Indian box-office but all eyes are on R. Balki’s Shamitabh with Amitabh Bachchan, Dhanush & debutante Akshara Haasan and Jai Jawan Jai Kisan, about the life of Lal Bahadur Shashtri, India’s second Prime Minister, which opens this week all over. Awaaz: Sounds Of The Soul, an evening of ghazals, semi-classical, Sufi & folk songs by Marina Hossain, Shafique Ahmadi & Krishna Teja is on Saturday, Feb.7nth @ Executive Hotel, Burnaby while The Royal Wedding Expo, the first Wedding Exhibition of 2015, is at The Royal King Palace B’Hall on Sunday, Feb.8th from 11-5 PM and with that, it’s time to say good bye but not before reminding you all to watch the Yaadein of producer-director-actress Kamini Kaushal, who completed 70 years in Indian Film Industry and was recently honoured by Life Time Achievement Award at the 60th Britannia Film Fare Awards 2015 on Sunday, Feb.8 @ 1 PM on SMC # 116!