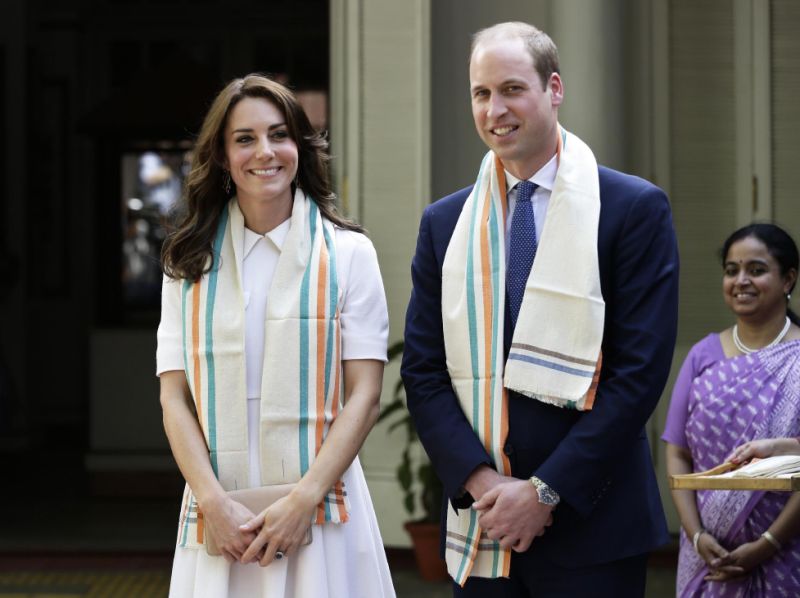 New Delhi, April 11 (IANS) The Duke and Duchess of Cambridge, Prince William and Kate Middleton, on Monday visited Gandhi Smriti and paid tributes to Mahatma Gandhi who fell to an assassin’s bullets in 1948. Prince William later said Queen Elizabeth II was very fond of India and it was “enormously important” to her.

The British royals arrived at Gandhi Smriti on Tees January Marg after laying a wreath at the Amar Jawan Jyoti — the eternal flame memorial dedicated to the ‘Unknown Soldier’ — at India Gate.

The Duchess and the Duke of Cambridge visited Gandhi’s memorial and paid tributes at the ‘Martyr’s Column’ — the spot where Gandhi was assassinated.

The couple was accorded a traditional welcome with a stole each of handspun khadi, and were shown around the museum which houses articles related to the Father of the Nation.

Gandhi Smriti director Dipanker Shri Gyan, who gave the royal couple a guided tour of the museum, said: “They told me they were surprised by his simple living; that such a man had such a simple life.”

Mahatma Gandhi lived at the complex for 144 days before he was assassinated there on January 30, 1948.

According to a British High Commission official, the couple asked questions about the spinning wheel that Mahatma Gandhi used and which is put on display there.

They were also inquisitive about Mahatma Gandhi’s statue at the complex’s entrance, and were told it was a symbol of peace.

Inscribed on the bronze statue of Mahatma Gandhi, standing with a boy and a girl besides him, is his famous quote: “My life is my message.”

The Duke and the Duchess also met around 30 schoolchildren, who sang ‘bhajans’ that gave the message of peace, as propagated by Gandhi.

Prince William said India’s contribution to the Commonwealth was “enormously important” to the queen.

Speaking at the reception to mark the 90th birthday of the queen, who also happens to be his grandmother, Prince William said the queen was very fond of India, the biggest country in the Commonwealth.

“Tonight, we are celebrating the links between our two countries. This is the first time Catherine and I have been to India and we have been incredibly impressed to see just how much this great country is on the move, and how India’s dynamism is matched by the warmth and welcome of its diverse people,” he said.

He also read out a message from the queen in which she sent best wishes to India.

“I have fond memories of our previous visits to India. This event today is a wonderful opportunity to celebrate the enduring friendship between our two countries, our shared culture and the business opportunities we can create together,” the queen was quoted as saying in the message.

Over 1,500 guests from Delhi’s business, political and diplomatic sectors attended the function.

On Sunday, the royal couple attended a welcome charity dinner hosted by the British Deputy High Commission in Mumbai.

The high-profile dinner was attended by the Who’s Who of Bollywood, who rolled out the red carpet for the royal couple.

Prince William and Kate are scheduled to have lunch with Prime Minister Narendra Modi on Tuesday.