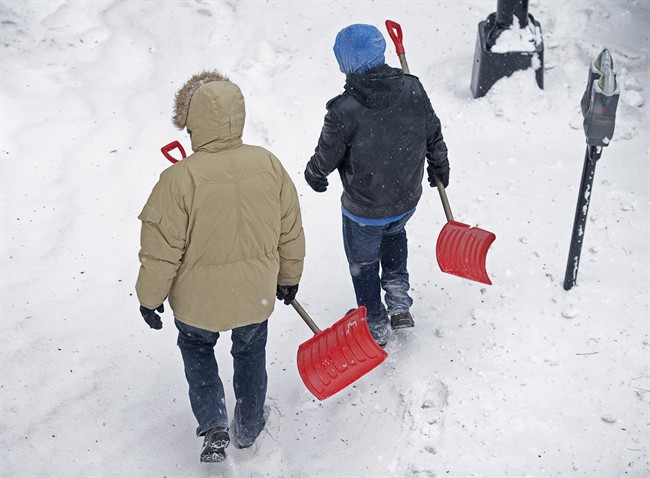 Halifax: While people across the Maritimes hunkered down during Tuesday’s powerful winter storm, Helen and Barry Gibb took in the snowy scenery on the mostly deserted streets of downtown Halifax.
Bundled up in hats and scarves, the couple from Liverpool, N.S., were trapped in the city by the storm and decided to get some exercise, so they braved the stiff winds and heavy snow.
“We’re roughing it at the Prince George (Hotel),” Helen Gibb said with a laugh. “We’re stranded. The roads were going to be too bad. So we went for a walk. It’s beautiful. Nothing’s open, but it’s beautiful.
“The city looks so pretty and it’s so quiet.”
Tuesday’s blizzard cancelled flights and closed schools, government offices and universities throughout the Maritimes as it moved north after having a similar impact on the Eastern United States.
Environment Canada issued blizzard warnings for Prince Edward Island, southeastern New Brunswick and most of Nova Scotia, along with a mix of freezing rain, wind and snowfall warnings for Newfoundland.
It said the highest wind gusts were recorded at 125 kilometres an hour in southwestern Nova Scotia and Moncton, N.B., got the most snow, with 30 centimetres late in the afternoon as the snowfall tapered off.
Meteorologist Linda Libby said she doesn’t expect the system to move out of the area completely until Wednesday evening.
“It’s a big storm,” she said from Charlottetown.
Officials throughout the region urged people not to drive, warning of near-zero visibility caused by wind gusts.
In Fredericton, cab driver Bud Munn said poor visibility in the blowing and drifting snow was his biggest concern.
“You can’t be bumper to bumper,” Munn said as he waited for his next fare outside a downtown hotel. “You’ve got to give yourself some space and time.”
Some cities took their buses off the road and Highway 104, the four-lane link between Truro in Nova Scotia and the New Brunswick border, was closed to traffic for a few hours Tuesday afternoon.
The private company responsible for operating the Trans-Canada Highway between Fredericton and Moncton also advised drivers to stay off the road with visibility limited to 30 or 40 metres in places.
Ross Mathers, the general manager of MRDC, said plows had trouble staying ahead of the storm.
“The problem is we’ve slowed down so much because of the visibility, we can’t do our normal speeds and that just causes us more problems, and then the wind comes by and whatever we’ve plowed over seems to be pushing it back in,” Mathers said.
Dozens of flights were cancelled at airports across the region but that didn’t mean a day off for security worker Brad Gilroy, who was taking the storm in stride as he took the bus to his job at the airport in Halifax on Tuesday morning.
“It’s all shut down from what I’m told but I have to report to work regardless and I’m … leaving my car safely in the garage,” said Gilroy, 50.
“Sometimes they’re much ado about nothing and sometimes they’re worse than forecast so you just have to take it moment by moment and judge it accordingly.”

By Michael Tutton, Aly Thomson and Alison Auld in Halifax, and Kevin Bissett in Fredericton.