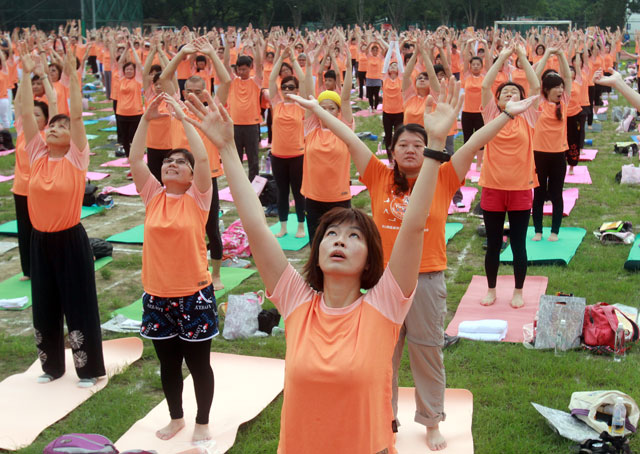 New Delhi:  The world is ready to observe the second International Day of Yoga (IDY) on Tuesday as Indian missions abroad held many practice sessions to prepare thousands of people for the day.

Indian missions in countries like China, Australia, the US, Britain, Pakistan and others organised Yoga practice sessions on various postures that are to be performed on June 21.

Pictures on websites of Indian missions across the world showed that people gathered in large numbers to be part of the international event.

Syed Akbaruddin, who serves as India’s permanent representative at the United Nations, shared the pictures of the building on Twitter.

“Yoga lights up UN, To celebrate #IDY2016, Yoga postures light up @UN headquarters in New York,” he said in one of the tweets.

The Yoga postures, the pictures suggest, could be seen from far off places in the US city of New York.

Similarly, a mass Yoga practice session was organised in Australia’s capital Canberra as part of the celebrations of the second IDY.

Yoga sessions were also held by Indian missions in China and Pakistan to prepare Yoga enthusiasts for the event.