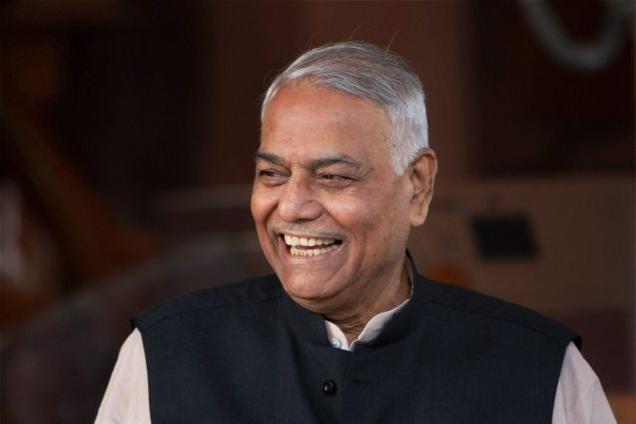 Addressing a news conference, the former Union Minister said there were many problems before the country.

Yashwant Sinha alleged that there was an atmosphere of fear in the country and their main commitment is “to save democracy and all its institutions”.

“We are told we are living in an age of communication but we are living in an atmosphere of fear. The whole country is living in fear, specially those of the ruling party. except me and Shatrughan Sinha. Where has the party of Atalji (Bihari Vajpayee) and (L.K.) Advaniji reached,” he said.

“The government machinery is being misused to create fear. It appears that speaking truth is now blasphemy,” he added.

The octogenarian leader said whether there is performance or not, there is belief that things can be managed with propaganda. “If facts are not in our favour, we will have ordered facts.”

He said the government has claimed success on foreign policy but India’s relations with Nepal and Maldives “are in tatters” and there are reports of military build up by China in Doklam.

Referring to farmers, he said they had been reduced to the “status of beggars”.

Sinha said they will take up the issues of concern to the people of the country.

Shatrughan Sinha said he had joined the platform for not having a forum to raise the voice within the party. “If we could have spoken there, if we were heard there or given opportunity to speak, then today this platform would not have been formed,” he said.

He added that his decision to back the front should not be viewed as anti-party activity as it was in the national interest.

With representatives of several parties present, the platform which was launched on the 70th death anniversary of Mahatma Gandhi, is being seen as another forum for opposition parties coming together against the Modi government in the run-up to the electoral battles this year and the 2019 Lok Sabha polls.