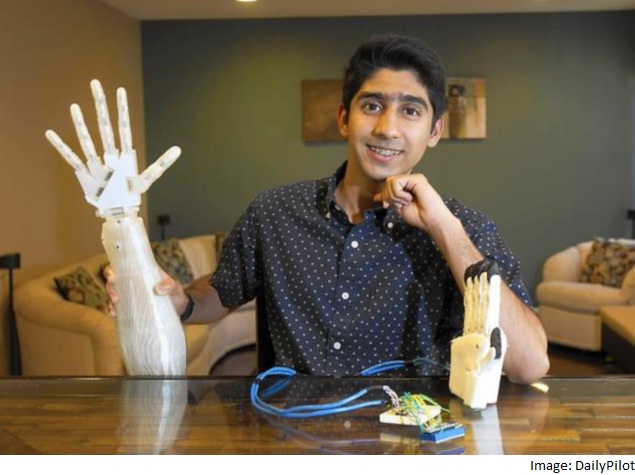 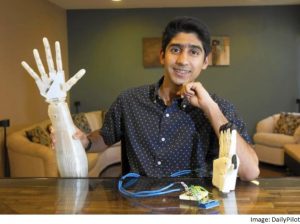 New York, Aug 4 (IANS) A 17-year-old Indian-origin teenager has won accolades for an inexpensive robotic arm he created for his school science fair project in California state of the US.
Nilay Mehta was awarded a blue ribbon award — an accolade that recognises a student’s academic excellence in US schools — for his project.
His project qualified for the Orange County Science and Engineering Fair where he won four first-place awards, Daily Pilot newspaper reported recently.
Nilay, a student of Irvine Public School in California, spent over four months building and programming the robotic arm to replicate the movements of a human hand.
“First I was confused about what direction I would go to, but I knew I wanted to do something in prosthetics. One issue I saw is that there were no lower-cost options,” Nilay was quoted as saying.
Contrary to the high-end prosthetic arms that cost about $35,000, Nilay’s arm can be purchased for $260.
The robotic arm operates by voice command. By speaking into a small microphone attached to the arm, the user can make the hand perform specific movements such as “pinch” and “grab”.
Nilay won third place in the biomedical and health sciences category at the Intel fair, held in Pittsburgh this year, where nearly 1,800 students from 78 countries showcased their projects.
He said he plans to develop the arm further and enter more science fairs.