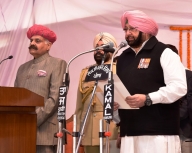 Chandigarh: Amarinder Singh was sworn-in as the Chief Minister of Punjab on Thursday.

He was administered oath of office and secrecy by Punjab Governor V.P. Singh Badnore at an impressive ceremony at the Punjab Raj Bhawan here.

Amarinder, a former Army captain, took the oath in English.

This is the second time that Amarinder, 75, has become Chief Minister of the state. He was earlier in office from 2002 to 2007.

The two women inducted are Aruna Chaudhary and Razia Sultana. Both will be ministers of state with independent charge.

The swearing-in ceremony was kept simple, as desired by Amarinder Singh, in view of Punjab’s financial health.

The low-key swearing-in opted for by Amarinder, who comes from the erstwhile royal family of Patiala, is in sharp contrast to crores of rupees spent by his predecessor Parkash Singh Badal for similar events in 2007 and 2012.

The Punjab government is believed to be under a massive debt of over Rs 200,000 crore, as claimed by the Congress during campaigning.

The Congress swept the elections with 77 seats in the 117-member assembly.