The berry picking had just begun when our previous article on the industry was published two weeks ago.  At that time the concerns were that the industry was in trouble for all but the very large farms.  The cost of land, equipment and supplies are expensive. Labour is a worry. The concern now is that there aren’t enough people willing to work the fields.  On top of that, a warm spring, which brought on a good crop, has turned into a wet start to summer. That could interfere with the harvest.

Badh added that within the last two weeks the weather has become worse and there is concern that if it continues to rain, the fruit will be damaged.

The Asian Journal spoke with an individual who participates in the family blueberry farm in the Fraser Valley who, wishing to remain anonymous, confirmed the industry isn’t what it was a few years ago. He agreed that the skyrocketing price of land, cost of equipment supplies and labour are critical items which are all but wiping out the margin. “It’s too expensive to go to machinery with a picker costing around $250,000 there is not enough revenue to service the debt,” he told us. 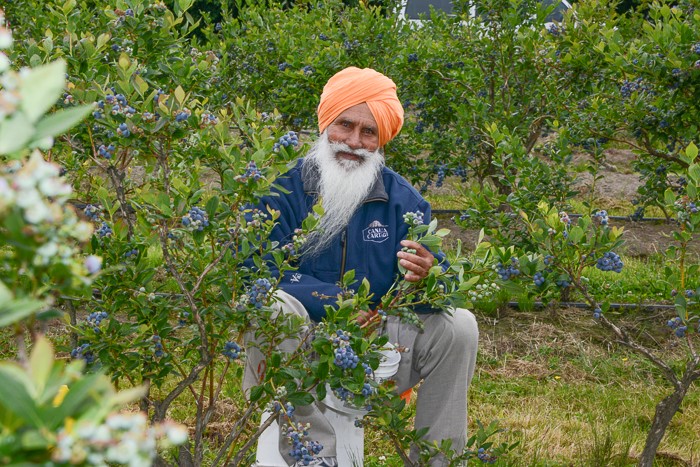 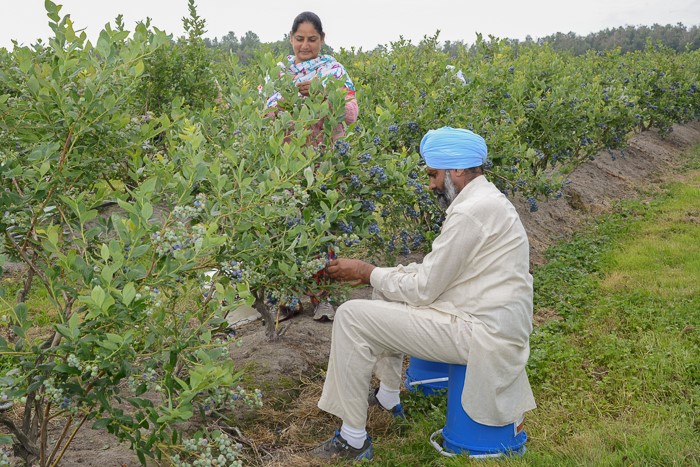 He said that the family farm he is involved with had become a hobby farm, which the family members work but do not draw any salary from. As Badh stated previously, the business cannot sustain family members who must secure outside income. A free enterpriser at heart, our source expressed concerns that the market isn’t as competitive as it could be, which really means that the inevitable outcome will favour the large corporate farms, with little or no opportunity left for the small farmer anymore.

Almost in contradiction to the reports from some farmers in the industry, last Sunday the Agriculture Minister, Norm Letnick and Debbie Etsell of the BC Blueberry Council visited Blueridge Produce in Langley to watch workers packaging fresh blueberries for export to China.

The Asian Journal reported earlier this year that a test shipment to China had met all of that country’s criteria, which resulted in a green light to expand exports. 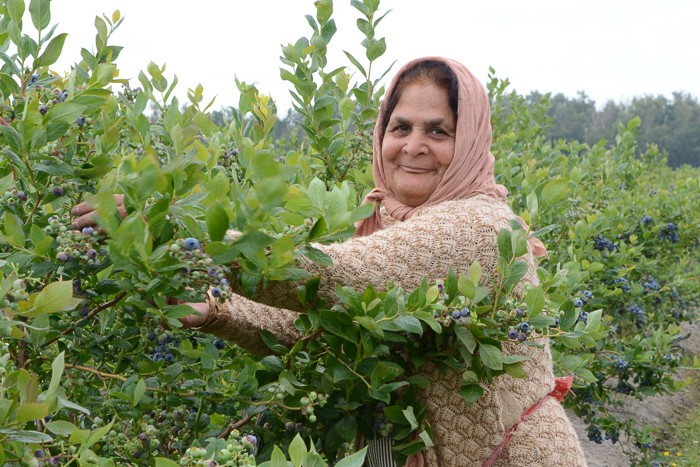 Now British Columbia will increase the amount of fresh blueberry shipments to China this season and B.C. blueberry growers could be looking at the potential of up to $65 million in exports a year, once the agreement is fully implemented, said a press release from the BC Ministry of Agriculture. This certainly looks like a boost to the industry.
So the question is, who gets to participate? Dale Badh has said that there needs to be some intervention by government to help the family farms.

“One of the things I have a problem with is the lack of involvement from the political side,” said Badh. “Turning a blind eye to the industry that has provided so much. No support. But I’m also blaming the industry itself. We don’t have a strong voice (organization). Cranberries have a quota system, potatoes have a quota system, other farm industries have the quota systems, which protect the prices and the farmers. Unless the blueberry industry realizes there are so many small players in the industry, and until somebody steps forward to try to save the industry, my biggest fear is that if these small farms go, we may lose this industry. If people can’t make a living doing this, why would they? They’re working outside the farms and supporting the operations, yet the politicians will say they want to preserve farmland. Well, do something about it.  Step forward and help these farmers. The properties that the Punjabi families have brought back into agricultural use, were being neglected. I think sooner or later we’ve got to realize that we’ve got to protect this industry, every level of government has to step in.”

The Asian Journal will continue to cover the issue and report on other perspectives and possible solutions.