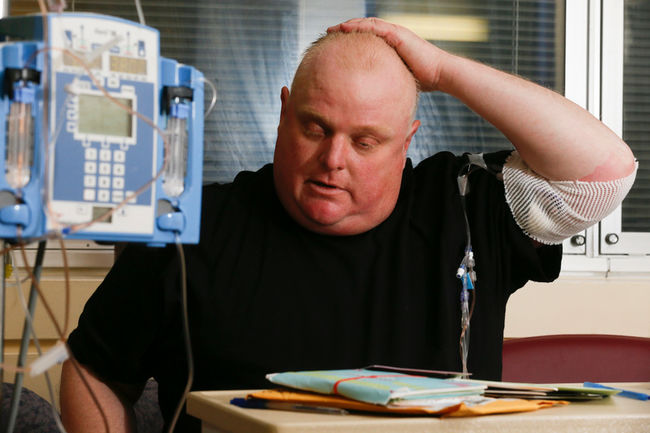 Toronto: The death of Toronto’s controversial former mayor Rob Ford sent shock waves throughout the city and beyond Tuesday, with supporters and detractors alike voicing their grief and sympathy at the loss of one of Canada’s most colourful and notorious public figures.

The family has confirmed that the 46-year-old succumbed to cancer today, 18 months after doctors discovered a softball-sized malignant tumour in his abdomen.

The diagnosis in September 2014 came less than a year after Ford confessed to smoking crack while in one of his “drunken stupors.”

The illness forced him to withdraw from his bid for re-election as mayor and he ran instead for a seat on city council, winning in a landslide despite his notoriety.

Ford’s term as mayor featured a series of headline-grabbing antics, including slurs against minorities, lewd remarks about his sex life and his admission of serious crack cocaine and alcohol abuse.

Politicians of all stripes praised the passion and fierce determination that made Ford a political powerhouse for years and endeared him to throngs of devoted followers despite the cloud of scandal that hung over him.

Ford’s successor, Mayor John Tory, said he was sad the man he described as “a profoundly human guy” would not return to city hall, adding Ford’s presence “will be missed.”

“The city is reeling with this news, and my thoughts are with his wife Renata and their two children, as well as Rob’s brothers Doug and Randy, his sister Kathy, his mother, Diane, and the rest of their tight-knit family,” Tory said in a statement.

He praised Ford as a man who “spoke his mind and who ran for office because of the deeply felt convictions that he had.”

All flags on official poles at Toronto civic centres, including city hall, will be flown at half-mast in tribute to Ford, whose political career spanned more than a decade, the mayor said. A book of condolences will also be set up at city hall.

A moment of silence was observed at Ontario’s legislature as news of Ford’s death spread.

Prime Minister Justin Trudeau expressed his condolences to Ford’s family, as did former prime minister Stephen Harper, whose close ties to the ex-mayor were highlighted in last fall’s federal election.

“Rob was a fighter throughout life & dedicated public servant who will be remembered for his courage, love for Toronto & his family,” Harper said in a tweet.

Ford was also remembered as a “tireless fighter for the taxpayer and a true advocate for the people he represented” by the interim leader of the federal Opposition, Rona Ambrose.

The brash politician whose populist ideals drew unwavering loyalty from the so-called “Ford Nation” was remembered on social media, where a flood of condolences made him a trending topic Tuesday.

“RIP Rob Ford, you were a legend,” one person wrote on Twitter.

“RIP Rob Ford. You may have been Toronto’s Mayor, but you were America’s Sweetheart,” another said.

Even those who denounced his agenda voiced their grief online.

“My condolences to the family of Rob Ford. Although I did not subscribe to his politics I believe he was sincere. This is so sad,” read a message on Twitter.

“Clearly, I was not the biggest fan of Rob Ford, but the man has a family and actually loved Toronto. This is very sad,” read another.

Ford’s death also captured international attention, with news outlets around the world publishing profiles of the politician who made headlines when he admitted to using crack cocaine.

Ford, 46, died in hospital with his family by his side after a long battle with a rare and aggressive type of cancer.

With files from Michelle McQuigge, Allison Jones and Paola Loriggio