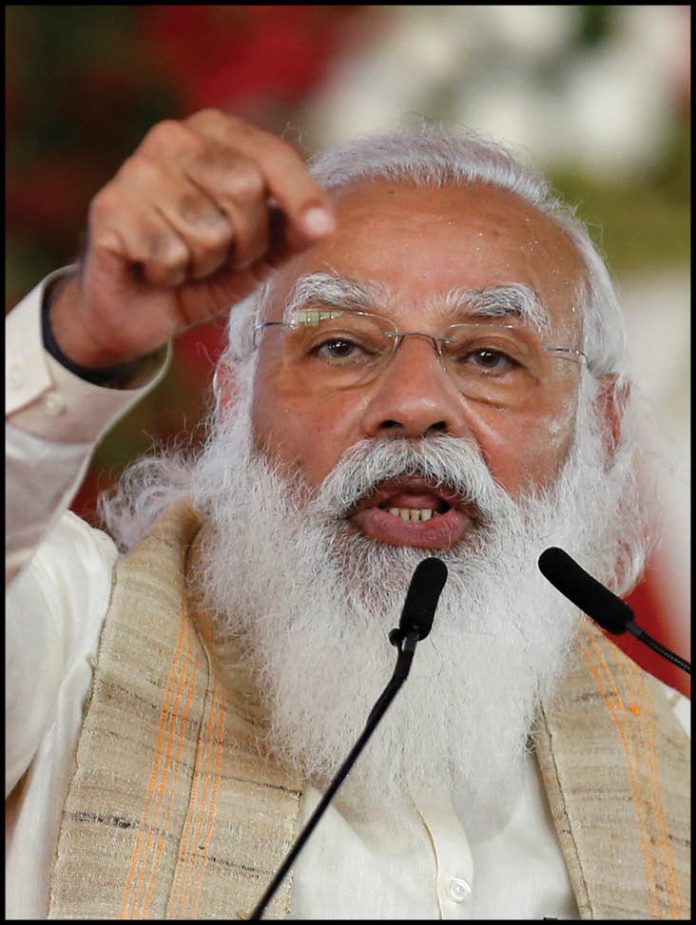 Srinagar (AP): India’s Prime Minister Narendra Modi visited Himalayan Kashmir on Sunday for his first public event since New Delhi stripped the disputed region’s semi-autonomy and took direct control in 2019.
Modi remotely inaugurated a tunnel and work on two hydropower projects before delivering a speech that was punctuated by his government’s developmental achievements. He said that the territory was put on a path of unprecedented development since 2019 but made no political commitments to the region’s people, who have been without an elected local government for four years.
“Let me assure the youth of the valley that they will not face difficulties and tribulations that their parents and grandparents faced,’’ Modi said, referring to the Kashmir Valley, the heartland of anti-India sentiment. His speech was a part of a function to commemorate the annual Panchayati Raj, or grassroots democracy, Day.
One of the power projects he laid foundation to on Sunday was first commissioned by Prime Minister Manmohan Singh in 2013.
Tens of thousands of people and elected officials from local councils across the region assembled in Palli village near Jammu city for the speech, which was held amid amid tight security. The area visited by Modi generally welcomed the Indian government’s changes of Kashmir’s status nearly three years
ago.
Officials say the councils represent grassroots governance but its members have no legislative powers.
Government forces fanned out across Kashmir to thwart any violence. On Friday, two suspected militants and a paramilitary officer were killed in a gunfight some 15 kilometers (9 miles) from Palli.
Police chief Dilbag Singh said the slain militants were a “suicide squad from Pakistan’’ likely sent to sabotage Modi’s visit. He did not offer any evidence to back up his claim.
Modi’s two previous visits after Kashmir’s status was changed were to military camps to celebrate a Hindu festival with soldiers. I n 2019, Modi’s government revoked the region’s semi-autonomous status, annulled its separate constitution, split the area into two federal territories Ladakh and Jammu-Kashmir and removed inherited protections on land and jobs amid unprecedented lockdown.
The region has remained on edge since, as authorities put in place a slew of new laws that critics and many residents fear could change majority-Muslim Kashmir’s demographics.