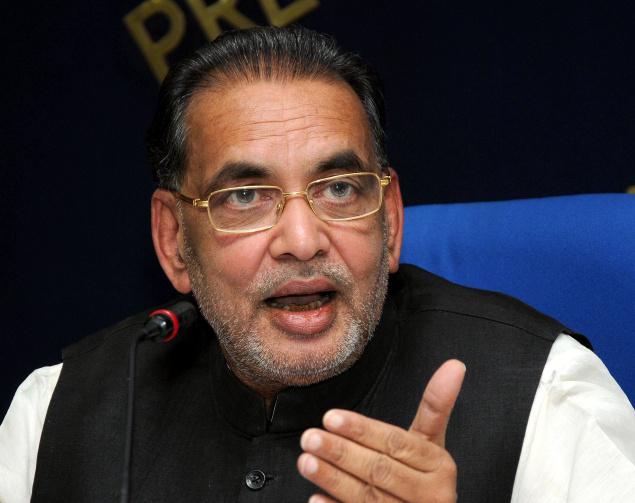 New Delhi, July 24 (IANS) Dowry, love affairs and impotency were among the reasons for the deaths of over 1,400 farmers in 2014, union Agriculture Minister Radha Mohan Singh said on Friday.
“According to the National Crime Records Bureau (NCRB), causes of (farmer) suicides include family problems, illness, drugs…dowry, love affairs and impotency,” he said in a written reply in the Rajya Sabha to a question on what had caused the death of so many farmers in the country.
The minister’s reply, however, did not rule out debt as one of the reasons.
The minister also cited NCRB data to show that the total number of suicides committed by persons working in the farming or agriculture sector were 13,754, 11,772 and 5,650 in 2012, 2013 and 2014 respectively.
The number of suicides by farmers due to agrarian distress, as reported by the state governments, was 1,066, 890 and 1,400 during 2012, 2013 and 2014 respectively.
The figure up to June 2015 is 263, the reply said.
Meanwhile, the minister’s reply triggered a storm with opposition parties accusing the government of “insensitivity”.
Congress vice president Rahul Gandhi demanded that Prime Minister Narendra Modi ask his ministers to visit the houses of farmers to “see what is going on”.
Samajwadi Party leader Naresh Agrawal demanded an apology from the minister, terming his remarks “irresponsible” while Communist Party of India-Marxist leader Sitaram Yechury dubbed as “ridiculous” the reasons given for the farmers suicides while the ground reality, he said, was different.
He said that the number of distress suicides had gone up by 26 per cent in the last one year since the NDA alliance came to power at the Centre and the reply was meant to “divert attention” from the actual reasons for suicides.
Communist Party of India leader D. Raja said the reply showed the government “callousness” towards farmers’ suicides, which occured due to “unprecedented debt crisis” faced by them and demanded that the central government take steps to come to their rescue.
Janata Dal-United leader K.C. Tyagi said apart from insensitivity, the statement was an “insult” to the country’s farmers. He threatened to move a privilege notice against the minister for “misleading” parliament.
Facing a political storm, Radha Mohan Singh sought to downplay the controversy, saying the answer was based on a NCRB report, which the government cited in the replies.
Of the total 5,650 farmers who committed suicide in 2014, maximum numbers were from Maharashtra, Telangana and Chhattisgarh, official data revealed.
According to ‘Accidental Deaths and Suicides in India 2014′ report released by the bureau, of the 5,650 farmers who committed suicide, 5,178 were men and 472 were women.
“The highest 2,568 suicides by farmers were in Maharashtra (45.5 percent), followed by 898 suicides in Telangana (15.9 percent) and 826 in Madhya Pradesh (14.6 percent),” the data revealed.
“Telangana reported the maximum cases of female farmers’ suicides at 31.1 percent followed closely by Madhya Pradesh (29.2 percent), and Maharashtra (14.1 percent),” it added.
Bankruptcy or indebtedness and family problems were the major causes behind the suicides, accounting for 20.6 percent and 20.1 percent of the deaths respectively. Other causes included crop failure (16.8 percent) and illness (13.2 percent).
The report revealed that 65.75 percent of the farmers who committed suicide were in the age group of 30 to 60. In all, 59 were below 18 years of age.
Even though 15 people took their lives every hour in 2014, the overall suicide figures witnessed a drop from 1,34,799 in 2013 to 1,31,666 in 2014, the NCRB said.
Here again, Maharashtra reported the maximum suicides (16,307), followed closely by Tamil Nadu (16,122) and West Bengal (14,310).
In addition, Bhopal reported a significant increase in the number of suicides – from 384 in 2013 to 1,064 in 2014, an increase of 177 percent, while suicides declined by 78.7 percent in Kanpur – from 648 in 2013 to 138 in 2014.