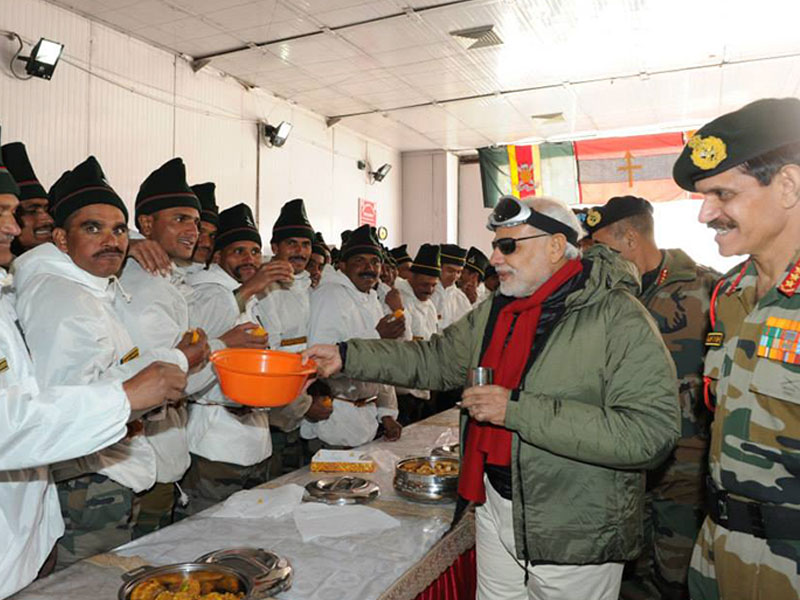 Srinagar: Wrapped in thick woolens, Indian Prime Minister Narendra Modi flew to the icy heights of Siachen Glacier in Jammu and Kashmir Thursday where he lauded the armed forces and promised a national memorial for Indian soldiers. He later announced an additional relief package of Rs.745 crore for the flood-ravaged state.

The Siachen halt marked the start of a visit on Diwali day to the state where he later met victims of the recent floods – the most destructive in 50 years – at Raj Bhavan, an event boycotted by Chief Minister Omar Abdullah.

“I am fortunate that as a servant of the nation, I got to see in what circumstances the soldiers have to live here,” Modi said, addressing troops in Hindi in freezing temperature at the world’s highest battlefield.

Dressed in battle fatigue woollen jackets, a red scarf and goggles to protect the eyes from blizzards, Modi promised to enforce a one-rank-one-pension scheme for the armed forces during his tenure.

“It is my duty to see that you and your family live in pride.”

The Siachen conflict between India and Pakistan has reportedly claimed more than 2,000 lives on both sides since 1984, with most soldiers falling victim to inhospitable weather and altitude problems.

“Everyone is aware of the extreme conditions at Siachen. Overcoming every challenge our soldiers stand firm, protecting our motherland,” Modi earlier tweeted.

“Be it the altitude or bitter cold, nothing deters our soldiers. They stand there, serving our nation. They make us truly proud.”

He said he had “a message from each and every Indian to our soldiers: that we stand shoulder to shoulder with you…

“We realize how and in what difficult conditions you are deployed here.”

From Siachen, Modi extended Diwali greetings to everyone — including President Pranab Mukherjee, the commander in chief of the armed forces.

“Perhaps this is the first time a prime minister has got the wonderful opportunity of spending time with our jawans on this auspicious day… Am sure this would be among the most unique greetings Pranab-da received.”

As Modi flew to Siachen, Pakistan Rangers fired at Indian paramilitary positions on the international border in Jammu, 365 km away while a strike called by separatists hit life in Srinagar.

Modi also said he wanted to build a national war memorial for the military.

Meanwhile, buses went off the roads in Srinagar but some private vehicles and auto-rickshaws plied during a shutdown called by separatist groups opposed to Modi’s visit.

Most shops were shut, and police and paramilitary personnel were deployed in large numbers all across the city.

Separatist leader Syed Ali Geelani accused Modi of rubbing “salt on our wounds” by visiting Kashmir on Diwali but not extending Eid greetings to Kashmiri Muslims.

Modi later announced an additional relief package of Rs.745 crore for rebuilding of damaged homes and hospitals in the flood-affected state.

“I had come here immediately after the floods last month and announced a relief package of Rs.1,000 crore. The purpose of my today’s visit has been to meet the people and get a better idea about what needs to be done for the people who suffered during the floods,” Modi told media persons at Raj Bhavan.

He said the loss memo of Rs.44,000 crore submitted to the Centre by the state government was being examined, and announced an immediate relief of Rs.570 crore for rebuilding of damaged homes and Rs.175 crore for similarly affected hospitals in the state.

Meanwhile, many flood-affected people who came to meet Modi returned disappointed as they were not allowed to enter Raj Bhavan.

“We were not allowed to go inside Raj Bhavan. Some people told us the list of those meeting the prime minister had already been finalized,” said the disappointed man, a flood victim who wanted to meet Modi.