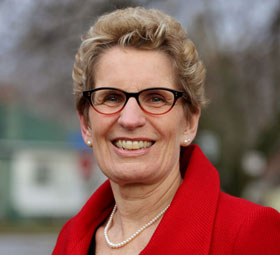 Toronto: Ontario is not wavering from its pledge to take in 10,000 Syrian refugees, Premier Kathleen Wynne said Tuesday, calling it a large, but doable commitment.

Some people are making a link between the refugee crisis and last week’s terrorist attacks in Paris and in light of that it’s important to confirm Ontario will settle 10,000 refugees by the end of 2016, she said.

Ontario is in discussions with the federal government over specifics of how, when and where to settle the refugees.

Saskatchewan Premier Brad Wall has asked for the federal government to suspend its plan to bring in 25,000 refugees in light of the attacks in Paris that left 129 dead and 350 wounded.

Wynne would not comment directly on Wall’s position, but said she believes it is possible to safely provide refuge for those in need while still ensuring security provisions are made.

“We believe that it is very important in the face of this humanitarian crisis to be resolute and to open our doors,” she said.

“We’re going to work with the experts as we have in the past and make sure that we do everything we can to live up to our commitments. It’s a big number, but there are millions of people who are in desperation at this point.”

Progressive Conservative Leader Patrick Brown said he is not calling for a suspension like Wall, but there are legitimate questions about what the security process will look like.

NDP Leader Andrea Horwath said she particularly wants to hear the Ontario government’s plan to house the refugees, since housing is an area in which many communities already have challenges.

The premier also spoke about the need to be vigilant to ensure the Paris attacks don’t trigger hatred and racism, making particular mention of a fire set at a mosque in Peterborough and an attack on a Muslim woman in Wynne’s own Toronto riding.

“I think that this is actually a time we need to reach out to our Muslim neighbours and friends and recognize the acts that took place in Paris were acts of terrorism and not borne of religion,”Wynne said.

Despite security concerns and an ongoing state of emergency, Wynne and the environment minister still plan to attend a climate change conference in Paris that is set to begin Nov. 30.