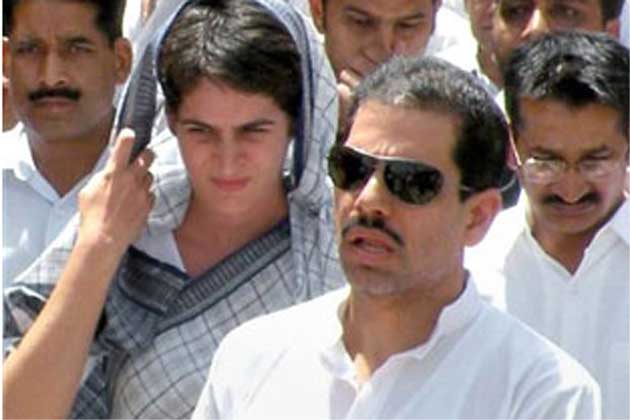 Chandigarh/New Delhi, May 13 (IANS) Controversial multi-million rupee deals of Congress president Sonia Gandhi’s son-in-law Robert Vadra are among land deals and other irregularities that will be probed by an inquiry commission, headed by a retired apex court judge, a senior Haryana minister said on Wednesday.

State Education Minister Ram Bilas Sharma told media here that the commission under the retired Supreme Court judge would inquire into all irregularities committed in the past 10 years of the Congress rule in the state, especially regarding land deals.

But the Congress party reacted cautiously to the statement saying that the Bharatiya Janata Party government in Haryana should first make an official announcement.

“I can’t react to it because there have been various BJP leaders saying this for quite some time now that they would get it probed but nothing happens… I would only react when Haryana Chief Minister (M.L.) Khattar or his government spokesperson confirms it,” he said.

The probe announcement came just days after the Congress hardened its stand on the land acquisition bill tabled by the Narendra Modi government in parliament and said that it would oppose the provision as it was not in the interests of farmers. The bill has been referred to a select panel of both houses.

“All irregularities, including land deals, will be probed. The notification of the commission will be issued on May 15 (Friday),” said Sharma, adding several complaints have been received by the BJP government in the state, which assumed office in October last year, regarding irregularities committed during the Congress rule.

Vadra was accused of accumulating land in the national capital region (NCR) area during the Congress government in Haryana led by Bhupinder Singh Hooda.

The land had cost his company only around Rs.15 crore and was sold to DLF after obtaining change of land use (CLU) and other permissions from the Hooda government.

Vadra made a clear Rs.43 crore but did not share the profits with Haryana’s town and country planning department. But the Hooda government gave Vadra and his companies a ‘clean chit’.

The BJP, in March this year, had targeted the Congress, saying that there was a “massive scam” in land deals in Haryana during the nearly 10-year-long Congress regime of Hooda.

The charge came after the Comptroller and Auditor General (CAG) blamed the Hooda government for showering undue favours on Vadra, who made millions in the controversial land deals. The CAG had indicated that the Hooda government had obliged Vadra with quick sanction of the permissions required.

Following the CAG report, tabled in the Haryana assembly in March, senior IAS officer Ashok Khemka, who had cancelled the land deal between Vadra with DLF, had said that he had been “vindicated” by the CAG report.

Alleging that Vadra’s land deals caused loss of crores of rupees to the state exchequer, Khemka marked a probe into all land deals of Vadra and his companies since 2005. But Vadra got a clean chit from the Hooda government.

“What can I say? It’s vindictive… it would not take them anywhere,” Dikshit told IANS, adding that the BJP, however, would not order any probe against the party’s own corrupt leaders.

Udit Raj, the BJP Lok Sabha member from North West Delhi, told IANS: “Law would take its own course… it’s not about any particular person.”

“There is nothing new to it. Our party had promised it (probe) even before the general elections last year,” he said.

Brinda Karat of the CPI-M refused to comment, saying she knows nothing about the probe having been ordered.

Informed that the news was confirmed, she said: “I have no comment to make on the issue.”