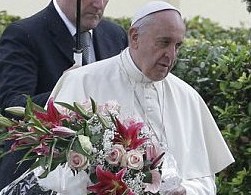 Rome, Jan 21 (IANS/EFE) Pope Francis Wednesday said war should not be fought in the name of god and appealed for peace in Niger, where Christian buildings were destroyed in protest against Charlie Hebdo’s Prophet Mohammad caricatures.

“Let us invoke the lord for the gift of reconciliation and peace; may religious sentiment never give rise to violence, oppression and destruction. War must not be waged in the name of god,” the Pope said.

During Wednesday’s weekly general audience, the pontiff called for prayers for the victims of the demonstrations in “beloved Niger”.

The Pope concluded the general audience by expressing his hope “to reestablish a climate of reciprocal respect and peaceful cohabitation, as soon as possible, and for the good of all”.