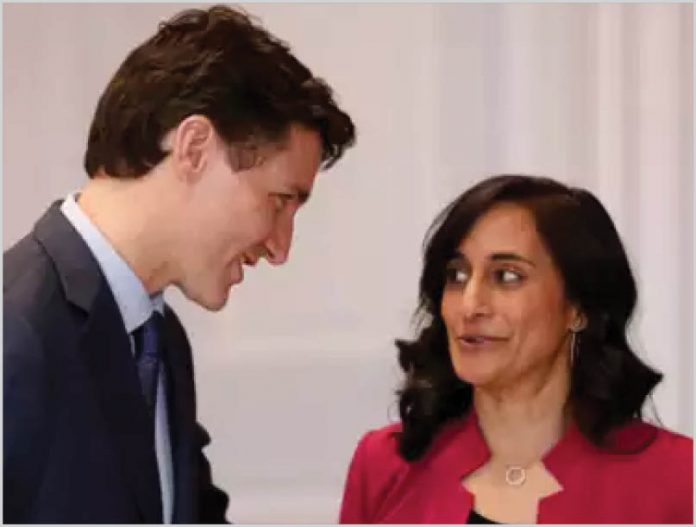 Colorado Springs: Prime Minister Justin Trudeau and Defence Minister Anita Anand got a first-hand look Tuesday at North America’s first line of continental defence, a system experts and political leaders agree is badly in need of an upgrade.
Trudeau and Anand, flanked by the U.S. and Canadian commanders of Norad, exchanged pleasantries with U.S. Defense Secretary Lloyd Austin as their visit got underway in a boardroom festooned with images of fighter jets and military insignia.
U.S. Air Force Gen. Glen VanHerck, the current joint commander of Norad and U.S. Northern Command, opened the meeting by professing the importance of his mission.
“I get up every single day, as do all of our other members, knowing that we have the most noble mission on the planet, and that’s defending our homeland,’’ VanHerck said.
“We need to talk a little bit about the challenges we face in the homeland. We’ll talk about our strategy to address those challenges. And then we’ll talk about some of the capabilities that we’re pursuing.’’
Trudeau held up the shared responsibilities of Norad as a prime example of the close nature of the relationship between the two countries.
“The world is changing in many ways _ threats are evolving, technologies are changing,’’ he said.
“But one thing that doesn’t change is the steadfast partnership and friendship that we have between our two countries. And nowhere is that more obvious than the integrated nature of the work we do here at Norad.’’
Trudeau, Anand and Austin were greeted by an honour guard flying Canadian and U.S. colours, as well as renditions of both national anthems.
“Norad is the world’s only binational command,’’ Austin told the Canadian delegation. “That highlights the depth and breadth of our relationship and our commitment to mutual defence.’’
Trudeau, Environment Minister Steven Guilbeault and Foreign Affairs Minister Melanie Joly will spend the rest of the week in Los Angeles, where President Joe Biden is hosting leaders from across the Western Hemisphere for the Summit of the Americas.
On Monday, Trudeau wouldn’t say explicitly whether he supports Biden’s decision to exclude Venezuela, Nicaragua and Cuba from the summit, owing to their disdain for democratic values and dubious human rights records.
The decision generated protests from other quarters of Latin America, as well as a prominent no-show from one of the endeavour’s most important partners: Mexican President Andres Manuel Lopez Obrador.
Some of the hemisphere’s countries are “less like-minded’’ than others, Trudeau acknowledged, but they all share a number of serious challenges, including migration pressures, climate change and recovering fully from the COVID-19 pandemic.
All three will be on the agenda at the weeklong summit, the leader-level portion of which is scheduled to get underway Wednesday.

By James McCarten
The Canadian Press

Canada, California to partner on climate action and nature protection

Canada is target of Russian disinformation, with millions of tweets linked to Kremlin