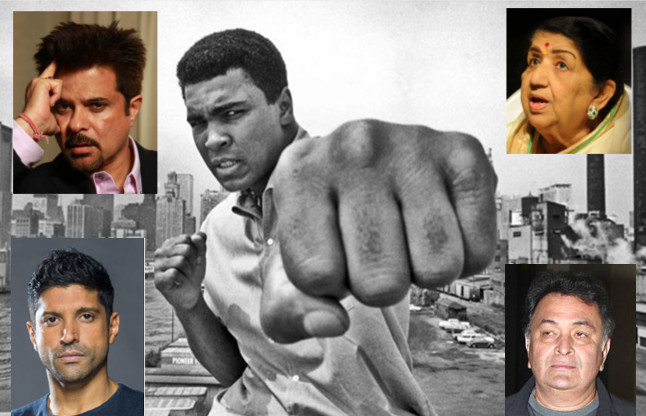 Ali was hospitalised for a respiratory problem on June 2.

One of the greatest boxers in history, Ali retired in 1981 and soon found signs of sluggishness and neurological damage. He thereafter received treatment for Parkinson’s disease.

Ali, known as Cassius Clay before he converted to Islam, began boxing training at the age of 12 years.

Here is what celebs had to say:

Lata Mangeshkar: A legend no more – Muhammed Ali…Had the privilege of meeting him on a flight to London with my niece, Rachana. She is a big fan and insisted on this picture.

Rishi Kapoor: RIP. Muhammad Ali. Was at a function with him in Bahrain think early 1980s. He was unwell and he called me “pretty boy”.

Anil Kapoor: His personality was as exemplary as his sportsmanship…his spirit will always dare us to dream bigger and soar higher! RIP Muhammad Ali.

Ayushmann Khurrana: “I’m so fast that last night I turned off the light switch in my hotel room and was in bed before the room was dark.” – RIP Muhammad Ali.

Arjun Kapoor: He stung like a butterfly and did float like a bee. Mohammad Ali was an inspiration to all of us. RIP.

Saqib Saleem: RIP champ. The greatest of all time.

Masaba Gupta: “I am going to show you how great I am” ….. And we were witness to it. A great life lived chasing fear, taking its pants off and knocking it out cold. Forever Ali. Muhammad Ali.

Abhishek Bachchan: Crushed! Muhammad Ali was the first sportsman I was told about by Amitabh Bachchan. He was inspirational and an idol.

Rana Daggubati: Woke up to the worst news! Strength to the greatest! Muhammad Ali. Greatest of all time.

Neha Dhupia: RIP Muhammad Ali. The world just lost one of its greatest.

Pooja Bedi: How sad that legendary Muhammed Ali is no more… The journey ends…But his legend lives on…”float like a butterfly sting like a bee”.

Vishal Dadlani: He won every fight and made it look like a dance. Even the one against life itself. RIP Muhammad Ali.

Mahesh Bhatt: It isn’t the mountains ahead to climb that will wear you out; it’s the pebble in the shoe. Muhammad Ali.

Kunal Kapoor: Praying for the champ Muhammad Ali. One of the greatest and most inspiring athletes ever.

Dia Mirza: Thank you for the strength. My childhood would have been incomplete without your inspiration. RIP Muhammad Ali.