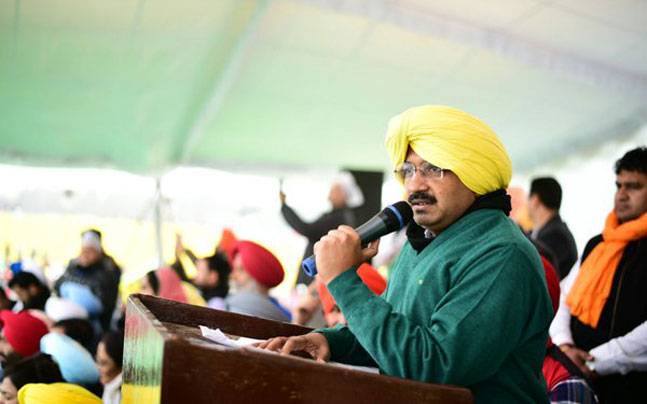 Muktsar (Punjab), Jan 14 (IANS) Launching a fierce attack on the ruling Badal family in Punjab, AAP leader and Delhi Chief Minister Arvind Kejriwal on Thursday urged people to oust the Badals from power, saying the once progressive state was on the verge of ruin.

“The Badals and their family have ruined a progressive state like Punjab in 10 years. In a state which was known to feed the country, farmers are now forced to commit suicide. Such is the state of affairs here,” thundered Kejriwal, sporting a yellow turban, at a huge gathering of Aam Aadmi Party supporters during the Maghi Mela (fair) held here.

Major political parties in Punjab – the ruling Shiromani Akali Dal, the opposition Congress and new entrant AAP – held their political conferences on the occasion. They were seen as a show of strength by all the parties ahead of assembly polls to be held in the state in February next year.

Top leaders from all parties, including Chief Minister Parkash Singh Badal (Akali Dal), Amarinder Singh (Congress) and Kejriwal (AAP), launched barbs at each other in their speeches.

“Today people have come here to take a pledge to oust the Badals. Even if people have to sacrifice their lives for this, they should be ready. Punjab is the land of sacrifices,” Kejriwal thundered.

The Delhi chief minister urged people in Punjab to take the cue from voters in Delhi who had, last year, voted the AAP to power in a big way. The AAP won 67 of the 70 assembly seats, leaving just three to the BJP – an Akali ally – and none to the Congress.

“People in Delhi have shown the way. I have spoken to many people in Punjab and I am confident the AAP will win 100 out of 117 seats in the state,” said Kejriwal, virtually launching the AAP’s election campaign.

“In Delhi, our government has stopped corruption. Eighty percent corruption has stopped in Delhi. My minister had demanded a Rs.6 lakh bribe. I sacked him immediately. If my son induldges in corruption, I will throw him out of the house too,” Kejriwal said.

He accused the Akali and Congress leaders of being hand in glove.

“The next assembly poll in Punjab is between two parties – AAP on one side and the Akali Dal, Congress and BJP together on the other side,” said a confident Kejriwal.

“Take Kejriwal to an agricultural field and Kejriwal will not even be able to recognise what crop it is. How will he help the farmers of Punjab?” Badal asked, taking a dig at the AAP leader.

Referring to Amarinder Singh, Badal said: “Amarinder has lost two times, has no capacity and has no chance to win again. He had been a rebel in the Congress in the last few years.”