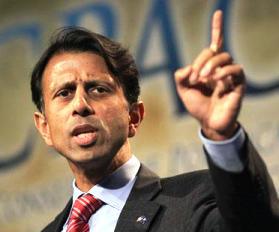 Washington, Nov 18 (IANS) Saying “This is not my time,” Louisiana’s Indian-American Republican Governor Bobby Jindaal has abruptly dropped out o the 2016 US presidential race.

Announcing his decision on Fox News Tuesday evening, Louisiana-born son of Indian immigrant parents from Punjab, Jindal, 44, said: “They raised me to believe Americans can do anything, and they were right, we can.”

“I don’t think in a million years they would have ever imagined that I’d be governor or one day I’d be running for president of the United States,” he said.

“But I’ve come to the realization this is not my time. So I am suspending my campaign for president,” Jindal said. “Going forward, I believe we have to be the party of growth and we can never stop being the party that believes in opportunity.”

“We cannot settle for the left’s view of envy and division. We have to be the party that says everyone in this country – no matter the circumstances of their birth or who their parents are – can succeed in America.”

Asked why his candidacy didn’t take off, Jindal said: “We spent a lot of time developing detailed policy papers, and given this crazy, unpredictable election season, clearly there just wasn’t a lot of interest in those policy papers.”

He is the third Republican to suspend his campaign, after former Texas Governor Rick Perry and Wisconsin Governor Scott Walker dropped out earlier this year.

Once seen as a rising star in the Republican Party, Jindal’s campaign failed to gain much traction as he kept polling less than one percent in various national surveys.

A Brown University graduate and Rhodes Scholar, he rose to prominence at the start of President Barack Obama’s first term when he was asked to deliver the Republican Party’s rebuttal to the State of the Union address in 2009.
But his performance was widely-panned.

In announcing his departure from the race, Jindal also said he would go back
to work at his think tank, America Next.

Jindal told Fox he is not endorsing another candidate right now, but will support the eventual Republican presidential nominee.

“At the end of the day I trust the American people to select our nominee for the next president,” he said. “I want someone who’s got the smarts to make big changes.”

One of his advisers told CNN Jindal believes government experience is needed in a presidential candidate, so he is more likely to back senators Ted Cruz or Marco Rubio than Trump or Carson, the two leading candidates in the race.

Jindal reached his decision, two aides said, because he didn’t want to go into debt and realised there was no credible path to the nomination.

Asked who would be the Republican nominee, Jindal told CNN, “It’s not going to be Trump. It’ll be somebody else.”