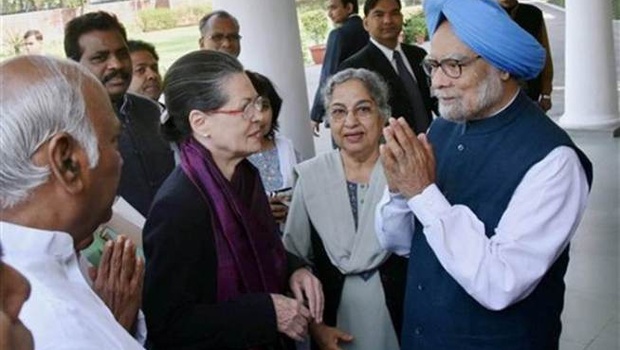 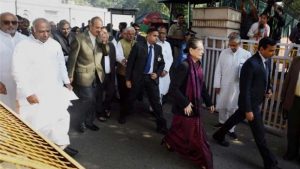 New Delhi, March 12 (IANS) The Congress on Thursday came out in solidarity with former prime minister Manmohan Singh, who has been summoned by a Delhi court in a case relating to the allocation of coal blocks, describing him as a man of “integrity” who enjoys the party’s “unstinting support”.
Congress president Sonia Gandhi personally led a march from the party headquarters here to Manmohan Singh’s residence to express solidarity.
“We are outraged at the news of summons being served on former prime minister Manmohan Singh… He is known for his integrity and probity not only in the country but across the world. We are here to offer our unstinting support to Manmohan ji,” she told reporters.
A special court conducting the coal block allocation case here on Wednesday summoned Manmohan Singh, industrialist Kumar Mangalam Birla and former coal secretary P.C. Parakh, terming the case a “criminal conspiracy” with the objective to “do an illegal act”.
Manmohan Singh, on his part, said he was “more than pleased and grateful” by the show of support.
“The Congress party, Sonia-ji and all members of the working committee and senior leaders have come to my residence, expressed solidarity with me and that we will fight this case to the best of our ability,” he said.
Senior Congress leader and former union minister Anand Sharma said nobody could question Manmohan Singh’s transparency and honesty and that truth shall prevail.
“The Congress party is with Manmohan Singh-ji and the party is not going to bow to any situation… We have full faith that in this case too the truth will prevail,” Sharma said.
Congress leader and former defence minister A.K. Antony, who was part of the march, said they were sure that Singh Manmohan will come out clean.
Jyotiraditya Scindia, a Congress MP from Madhya Pradesh, said: “We express our solidarity with the ex-prime minister. We are very confident that he will emerge clean, something that he remained during his public life.”
Former union finance minister P. Chidambaram said: “The CBI is an investigative arm of the government. The CBI has twice said that there is no charge and no ground to take criminal action and now the government should come and say that they stand by the CBI report. Why is the government reluctant to say that?”
Another former union minister, Kapil Sibal said: “Will defend former prime minister Manmohan Singh with all our might. Personally, I am saddened by the move, but we respect court orders.”
Meanwhile, the BJP said not just an individual but the entire Congress party should take responsibility for the coal block allocation case in which Manmohan Singh has been summoned by a special court here.
Parliamentary Affairs Minister M. Venkaiah Naidu said: “It is not the question of questioning the integrity of Manmohan Singh ji. It is the question of responsibility and failure of not taking action.”
“Manmohan Singh… will give his version but at the same time the Congress needs to explain to the country how these things have happened. It should take the responsibility (of the coal block allocation case) and not just an individual alone,” he said.
Minister of State for the Development of the North Eastern Region Minister Jitendra Singh said: “I would simply say… all of us should have the courage to accept the verdict in course of law. The world knows that India has one of the best constitutions and anything contradicting to it would amount to disrespect to the legal system.”